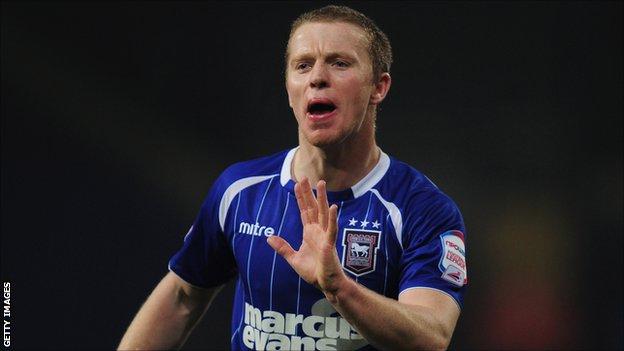 After a dull first half, Lukas Jutkiewicz blazed over just after the restart before Leadbitter had a penalty saved by Boro keeper Jason Steele.

Jutkiewicz made amends for his mistake with a close-range finish after a bout of Boro pressure.

However, Leadbitter also made up for his spot-kick miss with a stunning strike from 16 yards.

The game at Portman Road was rearranged after the original tie was abandoned because of a frozen pitch in February, and it offered Boro the chance to put some space between them and the chasing pack outside of the top six.

The game got off to a free-flowing start, but Leadbitter's 25-yard strike that was tipped over by Steele was the best chance until Tony McMahon had a long-rang free kick saved by Town keeper Alex McCarthy just before the break.

Seb Hines was forced to withdraw at half time with a head injury and his replacement Jutkiewicz livened the game up, but could not turn in from close range after McCarthy parried Barry Robson's strike into the former Coventry striker's path.

Ipswich forward Jay Emmanuel-Thomas was adjudged to have been brought down in the area by Richard Smallwood, but Leadbitter's powerful penalty was well saved by Steele.

A swift attacking move handed Jutkiewicz his moment of reprieve and this time he did not falter as he slotted home soon after the hour mark.

However, with 16 minutes remaining Leadbitter fired home the equaliser after finding space in the area.

"Grant's been terrific of late. After missing the penalty, he showed real character to take the shot on. It was a great goal and a tough technique, coming across his body like that.

"We looked a bit jaded. Eight games in a month is a punishing schedule and it took the penalty miss to breathe life into us.

"Then we went behind but showed good character and resilience to equalise. It would have been easy to feel sorry for ourselves."

Middlesbrough manager Tony Mowbray: "We came to counter-attack. Ipswich had won five on the bounce at home so we didn't come here to be over-expansive.

"We've won a lot of games on the road by trying to do that, being solid and not giving many goals away - as teams do at the Riverside.

"Our players thought the penalty was ridiculously soft, but goalkeepers who save penalties deserve credit. Young Steele has been a big plus for us this season."