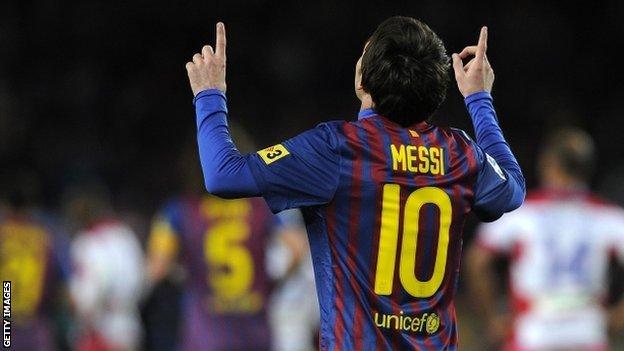 Lionel Messi broke Barcelona's 60-year-old goal-scoring record with a hat-trick in a 5-3 win over La Liga rivals Granada at the Nou Camp on Tuesday.

Messi, 24, equalled the record with a volley off a post in the 17th minute and then broke it with a lob in the 68th minute.

Cesar Rodriguez, who played for Barcelona in the 1940s and 1950s, held the previous record.

He was thought to have scored 235 goals for the club, but research by Barcelona's Centre of Documentation and Studies and La Vanguardia newspaper showed he had scored three goals fewer.

Messi, the World Player of the Year who is in his eighth season with Barca, has now scored 54 goals in all competitions this season.

He is also now the top-scorer in La Liga this season with 34 goals from 27 games, two ahead of Real Madrid's Cristiano Ronaldo. Athletico Madrid's Falcao is third with 17 goals.

"We have to congratulate Messi, he has scored so many goals and is only 24, he does not just score ordinary goals but great goals and we hope he gets lots more for us, we can compare him perhaps the Michael Jordan [American basketball legend] of football," said Barcelona coach Pep Guardiola.

"There are no players capable of dominating a sport with such superiority. In every sport there has existed only one player that can be considered as somebody unique. And this is the case. Yes, Messi can be compared to Michael Jordan."

Barcelona goalkeeper Victor Valdez said of his team-mate: "Messi is defining an era. He is the best."

He set the new record in Barcelona's win over Granada which moves the Catalan side to within five points of league leaders Real Madrid, who they face at the Nou Camp on 22 April.

Ernest Macia, of public Radio Catalunya, said it was a "historic evening" in Barcelona.

"Messi is exceptional, there will not be another player like him," said Macia.

"In Barcelona, people are used to successes of the team and of Messi but tonight, with the sight of history, many people will remember the night.

"I've heard many cars now on the streets celebrating that Messi has done it."

He was the league's highest scorer in 1948-49 (28 in 24 games) and topped Barca's goal charts for seven consecutive seasons.

The forward, who also coached Barcelona in 1963-64, was famous for his ability to score goals from corners.

He scored six goals in 12 appearances for the Spanish national side between 1945 and 1952.

Club legend Paulino Alcantara, who played for Barcelona in two spells between 1912 and 1927, scored 369 goals in 357 games. However, he played before the formation of La Liga and only 137 of his goals were scored in official matches.