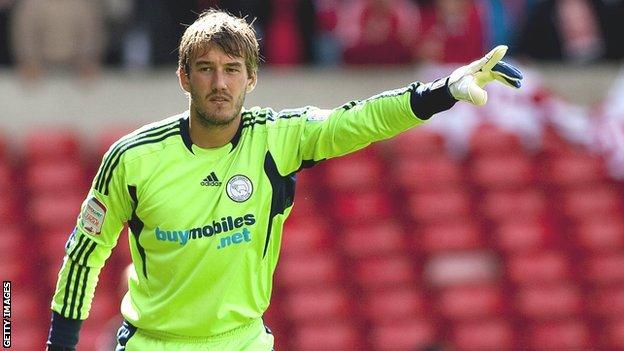 Legzdins, 25, left the Brewers in July but has only played two first-team matches this season.

Caretaker manager Gary Rowett, who has replaced the sacked Paul Peschisolido, said: "I had a conversation with Nigel Clough over the weekend and he is keen to get Adam playing games."

Burton have also recalled striker Greg Pearson from his loan spell with Crewe.

Rowett added: "Adam is experienced and I think that's exactly what we need with the run we have been on. The back four know Adam so he fits the bill perfectly.

"We brought Greg back in and I think the both of them will give everybody a lift. It's better to bring back in two people who everybody knows rather than having two new faces at this point."

Rams keeper Ross Atkins will also remain on loan at the Pirelli Stadium.

Rowett explained: "Ideally Nigel would have liked to have had Ross back at Derby to see how he has progressed but there's a technicality in there which means he will be staying with us until the end of the season.

"Ross has done fantastic for us this year and having him come out of the firing line may actually do him good in terms of his development."