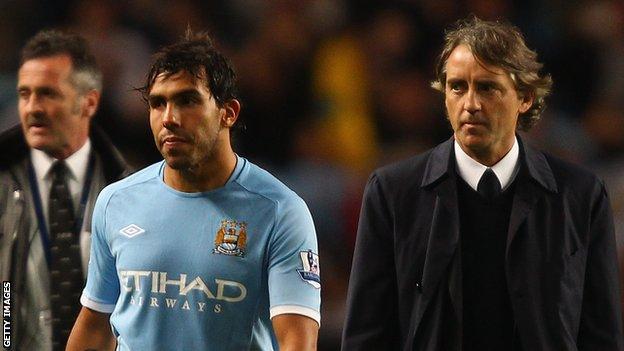 Carlos Tevez could make his return for Manchester City as a substitute in Wednesday's league match against Chelsea says boss Roberto Mancini.

Tevez, 28, has not played since September and spent three months absent without leave from the club.

"It's possible," said Mancini when asked about selecting Tevez.

"He is getting better but I don't think Carlos can have more than 25-30 minutes. He needs to play but for 90 minutes it is impossible."

City will cut the gap between themselves and leaders and local rivals Manchester United to one point if they overcome Chelsea at Etihad Stadium.

Mancini said a final decision on whether Tevez would be included in the match-day squad would be made on Wednesday.

He also raised the possibility that Tevez, who finished as joint top-scorer in the top flight last season, would be ready to start the potentially decisive derby against United on 30 April.

Tevez has played for the reserves since returning, scoring in a 3-1 win over Bolton on 6 March.

The Argentinian's last appearance for City's first team was in the 2-0 win over Birmingham in the Carling Cup on 21 September.

Six days later he was accused by the club of refusing to warm up and come on as a substitute during the Champions League defeat by Bayern Munich.

Mancini said in the aftermath of the incident that he wanted Tevez out of the club while the player reacted to being found guilty in a club disciplinary hearing by flying home to his native Argentina without permission.

After prospective moves to Inter Milan and AC Milan failed to come to fruition in the January transfer window, Tevez returned to the club on 14 February and his "sincere and unreserved" apology was accepted by Mancini.