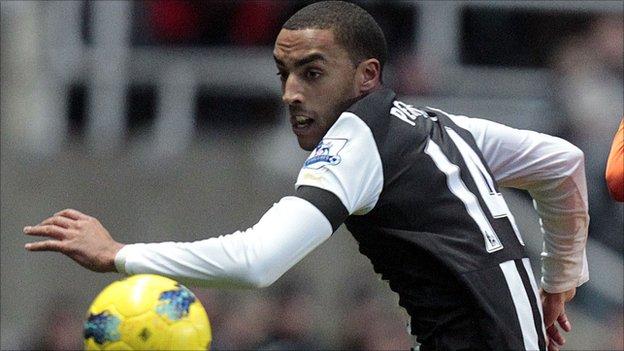 Newcastle United utility man James Perch has credited his versatility for giving him the opportunity to play Premier League football.

Perch has operated all over the field since his move from Nottingham Forest in 2010, and Sunday's 1-0 win against Norwich was his 29th top flight game.

"If I wasn't 'Mr Versatile' I don't think I would have played as many games as I have done in my career."

The 26-year-old added: "I'll play left back, right back, it doesn't bother me, as long as I'm out there on a Saturday or Sunday I'm happy."

"The gaffer knows I can do that, he trusts me and puts me in.

"For it not being good for my career; I wouldn't be playing at Newcastle, and sixth in the league."

Perch, who arrived with a reputation for versatility from Nottingham Forest in the summer of 2010, has largely provided cover at the heart of defence and in central midfield.

As a Forest player he spent much of his career in the centre of the park, but since moving north has been unable to carve a niche for himself.

"In midfield I like to put my foot in and head in where it hurts, I give 100% every week," Perch added.

"It's hard to tie down a position, but there are people who have done it in the past, John O'Shea and Phil Neville who are international players.

"I don't see why I can't continue being 'Mr Versatile' and still doing well."