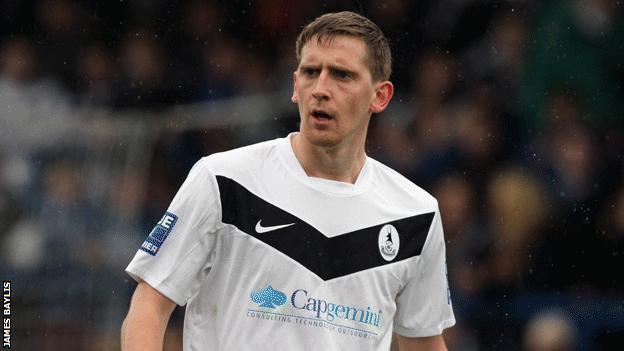 Kinniburgh made his debut for the Bucks in their 4-1 defeat against Fleetwood Town on Saturday, four months after his previous match for Cambridge United.

"I'll have to wait to the end of the season, but this is a really good football club with a bright future."

The former Rangers trainee signed on non-contract terms to provide cover for the injured Sean Newton and suspended Ryan Valentine.

"I thought I did ok against Fleetwood, it was my first game getting to know everybody, but I was quite pleased. I haven't played for a while so it's nice to be playing again," he added.

"I'm here for six weeks and want to show everyone what I can do."

Kinniburgh will be in Andy Sinton's squad to face Kettering Town on Tuesday night with fellow full-back Ryan Valentine available again after serving a three-match suspension.

Listen to full match commentary of Kettering against Telford on BBC Radio Shropshire DAB digital radio or online at bbc.co.uk/shropshire.