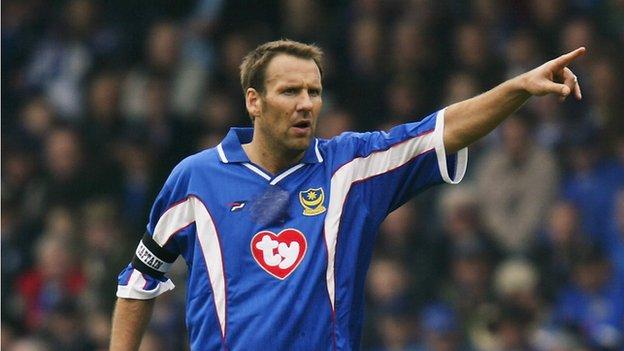 Former Portsmouth captain Paul Merson has admitted he is upset to see the current plight of the club.

Merson, who led Pompey's promotion to the Premier League in 2003, believes that the recent highs have made their financial problems seem even worse.

"It's very sad. It's horrible what is going on down there at the moment," the 43-year-old told BBC Radio Solent.

"For everything they've had, winning the FA Cup, being in Europe, it makes it even worse."

He added: "It looks like Southampton are going to get in the Premier League, it's just rubbing salt in the wounds."

Merson feels particularly upset for the club's supporters, who still hold a special place in his heart.

"It's a shame for them and you really hope it doesn't get out of hand. I hope they get it right and it would be nice if they found a multi-millionaire who lives in Portsmouth to come and help out, you never know."

He also admitted that he feels sorry for manager Michael Appleton, who took on his first full-time managerial role at Fratton Park after a brief stint as caretaker of West Bromwich Albion.

"I feel sorry for the manager as well. He went there to start off his career and I think he will be very good, I really do, it's a shame for him," Merson concluded.