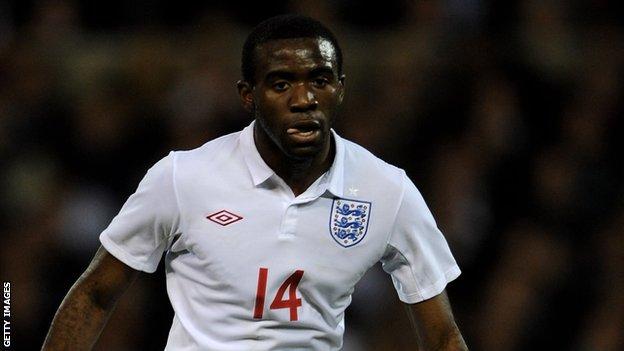 Bolton manager Owen Coyle says he has held a "brief" conversation with Fabrice Muamba for the first time since the midfielder had a cardiac arrest.

The 23-year-old was left fighting for his life at the London Chest Hospital after collapsing during Saturday's FA Cup quarter-final at Tottenham.

"There's still a long way to go but that is really positive," said Coyle.

Bolton owner Eddie Davies has told the BBC he plans to visit the ex-England Under-21 international on Wednesday.

Muamba spent a "comfortable" night in intensive care, said a joint statement from his club and the hospital.

His condition was said to be serious but no longer "critical" after he began to move and speak on Monday.

Davies, who said he had watched Muamba's collapse on television, said the player was "recognising people and putting sentences together".

Speaking to the BBC from his home on the Isle of Man, Davies added: "It is early days so we don't want to get over optimistic about things because people can relapse in these situations. But at the moment there are no bad signs."

The club was also due to open up the Chairman's Suite at the Reebok Stadium between 1830-2100 GMT on Tuesday to allow fans an area for quiet reflection and prayer.

Meanwhile, Premier League chief executive Richard Scudamore said football would look to learn any possible lessons from the incident but that it was "too early" to decide on changes yet.

Ashley Cole and fellow former Arsenal colleagues Johan Djourou and Nicklas Bendtner (who both played alongside Muamba at Birmingham City) were among a number of Premier League stars who made the trip on Monday.

Muamba's fiancee, Shauna Magunda, the mother of his son, Joshua, tweeted on Tuesday: "Your positivity, love and faith is helping Fabrice. For that I can only thank you all."

Bolton have said they expect the club's scheduled match against Blackburn Rovers to go ahead on Saturday, although a decision is expected on Wednesday.

The club's game against Aston Villa on Tuesday night was postponed, with no new date yet confirmed.

There is also no update about the abandoned FA Cup clash with Tottenham.

However, Spurs manager Harry Redknapp said any member of his squad "not in the right frame of mind to play" after Muamba's collapse at White Hart Lane would be allowed to sit out Wednesday's clash with Stoke City.

He added the news that Muamba was making good progress was "fantastic."