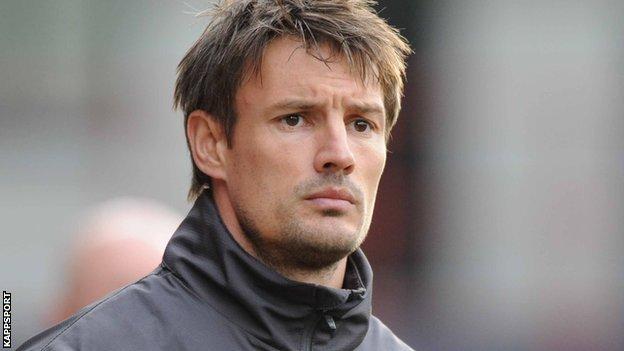 Kettering Town caretaker boss Ashley Westwood is being forced to juggle the squad because of their player registration embargo.

The Poppies had to de-register Ollie Jones and Mark Pryor ahead of last Saturday's 2-0 defeat by Alfreton.

Westwood told BBC Northampton: "It's awkward, but it's the rules."

Gray, 19, is a former Middlesbrough Academy striker, and had previously represented Northern Ireland's Under-17 team.

"He did well [against Alfreton], he had some neat and tidy touches and showed a bit of enthusiasm," said Westwood.

"He'll only get stronger with the games he gets and [help us in] getting some goals."

Van Engel made his debut in the 2-1 win over AFC Telford, having previously played for Dutch amateur side, SVV Scheveningen.

The embargo has been in place since last November and the Poppies are restricted to 16 players in their squad, although they can make non-contract signings to replace those players out with long-term injuries or suspensions.

"Ollie, Mark and Lewis had to go because we had 16 for Saturday, and weren't allowed to keep them even if we'd have liked to.

"We had four subs and Marcus Kelly [still counted in the squad numbers] because he wasn't going to be out for over two weeks."

"Jerel is out for a minimum of three weeks after he rolled his ankle [against Alfreton]."