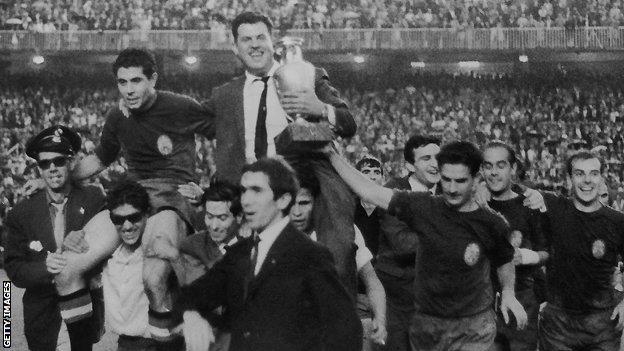 If Spain can legitimately claim to be the dominant force in the global game today, having won Euro 2008 and the 2010 World Cup, they certainly kept their fans waiting.

Their only previous international success came way back in 1964 at the European Championship, then known as the Nations Cup, playing hosts to what was only the second staging of the competition.

As Spaniards revelled in the glory of a final victory over the Soviet Union at a Bernabeu filled with almost 80,000 fans, little did they know it would be another 44 years before they would taste success again.

Spanish midfielder Luis Suarez was a part of that victorious team and, having helped Inter Milan to back-to-back European Cup success prior to the competition, he brought vital experience to a young Spanish side.

"My main memory [of the final] is of the atmosphere because the Bernabeu was full," Suarez told the Uefa website.

"What's more, we had suffered a lot during the semi-final against Hungary [the hosts secured a 2-1 victory in extra time], so the fans were in the right frame of mind to get behind us right from the start. That gave us a great sense of security and helped us to stay calm."

Played at the home of Real Madrid, the final venue was familiar territory to Spanish team coach Jose Villalonga Llorente.

He started his managerial career in charge of Los Blancos and led Real to triumph in the inaugural European Cup in 1956. Just 36 then, he remains the youngest coach to win the tournament.

Villalonga added to his impressive CV with the treble of domestic league and cup and another European Cup for Real a year later before going on to manage the club's city rivals Atletico.

He took over the Spain job in 1962 and put together a team with similar characteristics to its modern day counterparts.

The Spain of the current day are dominated by players from the country's top two clubs, Barcelona and Real, and six of the starters in the Euro 1964 final were also drawn from the great rivals.

"We played well as a team," added Suarez. "We were very compact and the players understood and complemented each other very well, partly because they came from only a few clubs.

"There was only one player with a lot of international experience - me!

"I was the oldest player [at 29] and I was already playing abroad. But it was a team, rather than a selection of top players, and this teamwork was the crucial element in our triumph.

"We had great support from the Spanish people. The fans identified with us, maybe because we were a very young team willing to achieve something."

Euro 1964 was a tournament in which political tensions had an impact.

Greece were drawn with Albania for a qualifying tie but, with the two countries at war, pulled out.

Those that did enter played home and away qualifying ties, leaving the last four teams to travel to Spain for the finals.

Luxembourg proved the surprise team of the qualifiers as they beat the Netherlands 3-2 on aggregate before eventually losing to Denmark in a tie that required a third game to settle it.

Their conquerors reached the semi-finals along with hosts Spain, Hungary - who had eliminated Wales in the preliminary round - and the Soviet Union.

England's brief excursion in the competition resulted in a preliminary round 6-3 aggregate defeat by France, with a 1-1 draw at Hillsborough followed by a 5-2 defeat at the Parc des Princes in the second leg.

Political tensions were to the fore again once Spain and the Soviet Union progressed to the final.

Spain, under the rule of General Franco, had refused to travel to the Soviet Union for a quarter-final tie for Euro 1960 but were allowed to play by their Generalissimo this time around.

But the 2-1 triumph that followed would prove, for almost half a century, an isolated moment of glory for the hosts.

And they would not even reach another European Championship finals until 1980.

Even so, 1964 is not a triumph that has attained the iconic status England's 1966 World Cup triumph holds in this country.

The Spanish public certainly got behind their team for the tournament, but it is a victory that appears to have faded quickly from hearts and minds.

"If you look at that win, the Spanish public don't consider it as important as it was," said Juan Castro, a journalist at Spanish daily sports newspaper Marca. "But we cannot forget Euro 1964.

"It is not in the hearts of the public. That is probably because, although we remember Luis Suarez, it was a team of no superstars.

"If you ask someone in a Spanish bar who was the coach of the Euro 1964 team no-one would remember Villalonga.

"It was important at that time but it has not been kept in the memory."