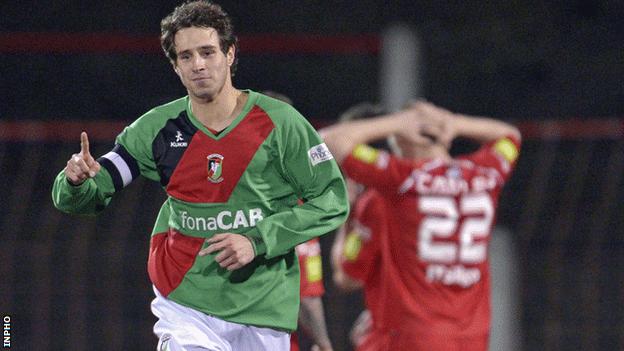 The lights went out on Glentoran's Setanta Sports Cup hopes when they drew 1-1 with Sligo Rovers in the quarter-final second leg.

Floodlight failure at the Oval forced a 10-minute delay in the second half on a disappointing evening for the Glens.

Glentoran trailed 2-0 after the first leg but captain Sean Ward scored a 25-yard screamer to put his team back in the tie.

The game was on a knife-edge until Danny North scored a penalty for Sligo.

It was scrappy early on, but Glentoran were shading the exchanges.

Sean Ward broke the deadlock with a superb long-range shot which flew into the top corner on 23 minutes.

David Cawley went close for Sligo after the break and the game was on a knife-edge in the closing stages as Glentoran went in search of a second goal which would have taken the tie to extra-time.

However their hopes were dashed when Danny North slotted home an 89th-minute penalty after Romauld Boco was upended inside the box by Callum Birney.