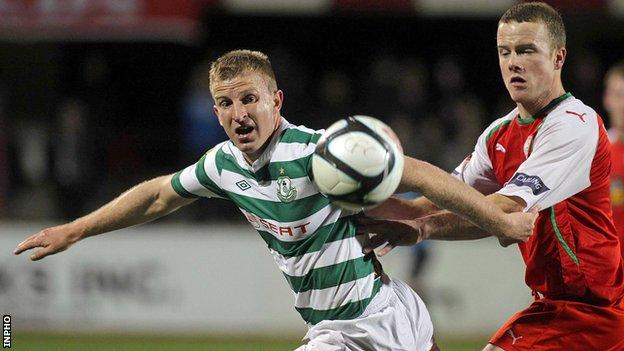 Cliftonville bowed out of the Setanta Cup on penalties after a brave second-leg home win over Shamrock Rovers.

Both sides had chances before Barry Johnston headed the Reds into the lead on the stroke of half-time.

Gormley was the only Reds player to convert a spot-kick as strikes from Billy Dennehy, Chris Turner and Graham Gartland earned the holders a place in the semi-finals.

Cliftonville started brightly and Donnelly fired over the bar on five minutes.

An Eamon Seydak slip set up a chance for Killian Brennan but the Cliftonville player got back to make a saving challenge.

Northern Ireland Under-21 international Turner tested Reds keeper Ryan Brown with a good shot while Jansson denied Caldwell at the other end on 29 minutes.

Johnston headed the Reds into the lead in first-half injury-time as he connected with a Donnelly cross.

Gormley's 86th-minute goal was also a header as he rose to nod home a Caldwell cross.

Killian Brennan hit the Reds woodwork two minutes from the end of normal time as the game went into extra-time.

The 30 minutes failed to produce a goal and keeper Jansson proved the Hoops hero in the shoot-out.