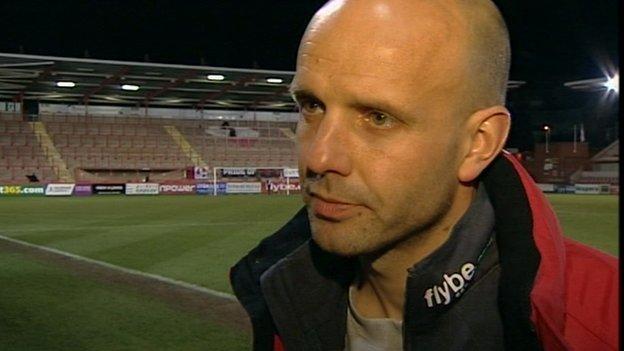 Exeter City boss Paul Tisdale says he is 'realistic' about his side's chances of staying up in League One.

A on Tuesday saw the Grecians slip five points away from safety.

City have been hampered by injuries to key players such as and Richard Duffy while David Noble has been serving a three-match ban.

"People need to understand that we are in a very good league, we're a very small club at this level," he said.

"At some point we're going to have a hard time and we're having it now.

Whatever happens it's not doom and gloom, it's a high quality problem we find ourselves with

"At some point it was going to happen and we'll have to fight to the end, there's no reason why we can't fight until the end and we have to keep believing," he told BBC South West.

Tisdale has taken the club from the Blue Square Bet Premier to League One in his six years in charge and says the club is in a better place than it has been over the past few years.

"Whatever happens it's not doom and gloom, it's a high quality problem we find ourselves with.

"That's not a defeatist attitude, that's a realistic attitude and we've got to keep going."

Exeter will welcome back captain David Noble into the side's midfield for Saturday's trip to Tranmere Rovers after he was sent off at Brentford earlier this month.

"I think that it's been confirmation in the last three games, albeit that our home crowd are not particularly fond of him, that he is without doubt the heartbeat of our team and without him we are at a loss," Tisdale added.

"We need people with nerve who can play and he's that person for us, he wasn't there today and he's not been there for the last two games and it's been very, very difficult."