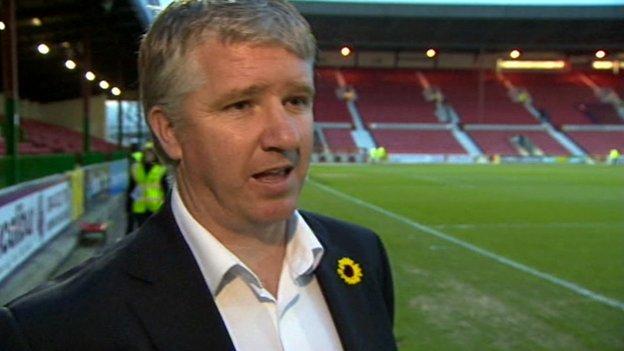 Torquay boss Martin Ling says he will not bring in any more players before Thursday's deadline for loan signings.

United are second in League Two after their 2-0 loss at leaders Swindon, and already have loanees Ryan Jarvis and Angus MacDonald in their squad.

"I won't be taking anybody in," Ling told BBC Radio Devon. "I'm happy with the 23-man squad we've got, it's done the job so far.

"We're covered in all areas and I don't think we need to strengthen."

He added: "We know that we are the team up there that have got the least money, but once the window shuts on Thursday we'll get on it and move on with what we've got and see if we can keep pushing the best we can."

The Gulls are seven points off Swindon but are two points clear of fourth-placed Southend with eight games left in the season.

And Ling feels his side are able to keep challenging for automatic promotion to League One.

"If we get in that top three we've had a wonderful season and we keep pushing for that the best we can.

"I just feel we need to keep doing what we've been doing over the last eight games," Ling added.

"At this moment in time it's still in our own hands, we'll be in there fighting as we have been all season."