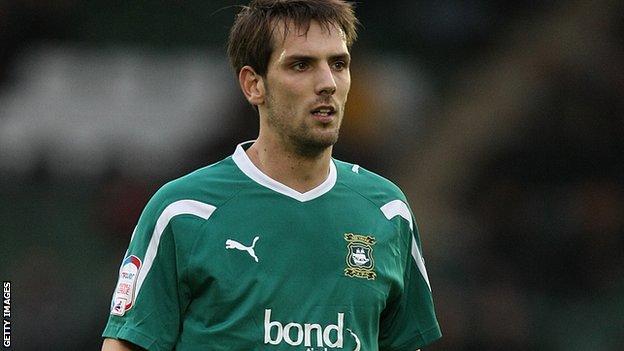 Plymouth Argyle manager Carl Fletcher has praised defender Max Blanchard after he scored the equaliser in their 1-1 draw with Bristol Rovers.

Blanchard, 25, joined Argyle as a free agent in November and has played 20 times for the Home Park club.

"I'm pleased for Max because he works hard each and every day, as most of them do."

Blanchard equalised with six minutes to go to secure a point which saw them move out of the relegation zone.

"First half we were a bit disappointed with the way we played but we came out in the second half and I'm pleased that the lads stuck to what they wanted to do," Fletcher added.

"They kept hold of the ball and at 1-0 down you can get into a tendency to just punt it forward all the time.

"But I thought they did great and kept it and tried to move it and we got the goal at the end.

"If we got it maybe a little bit earlier we could have gone on to win the game."