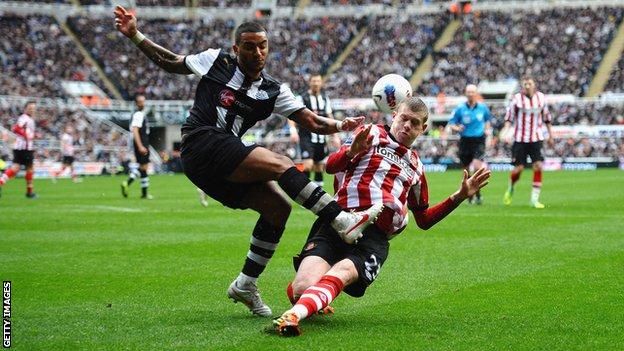 Newcastle have been fined £40,000 and Sunderland £20,000 after both clubs accepted misconduct charges following their bad-tempered derby on 4 March.

Sunderland forward Stephane Sessegnon and captain Lee Cattermole were sent off in the 1-1 draw.

The Football Association said the charges related to an incident after a late challenge from James McClean on Newcastle's Danny Simpson.

Both sides have also been warned about their future conduct.

Newcastle were handed the greater punishment having also been charged following their 1-1 draw with Arsenal on 13 August.

Sessegnon was red-carded for elbowing Cheick Tiote and captain Cattermole was sent off after full-time.

McClean was shown a yellow card by referee Mike Dean for the tackle on Simpson, whose angry reaction also earned a caution.

Eight players were booked and Pardew later criticised Sunderland for adopting an "ugly" approach, a claim rejected by O'Neill.

Cattermole was banned for four matches for his dismissal and Sessegnon was given a three-game suspension.

"Newcastle United and Sunderland have been fined £40,000 and £20,000 respectively after both clubs admitted a charge of failing to ensure their players conducted themselves in an orderly fashion and/or refrained from provocative behaviour," read an FA statement.

"The incident, which also saw both teams being warned as to their future conduct, occurred in the 19th minute of their game on 4 March, 2012 and followed a challenge by Sunderland's James McClean on Newcastle's Danny Simpson.

"As this is Newcastle United's second misconduct charge of a similar nature in the same season, the standard punishment fine has been doubled in line with current regulations."