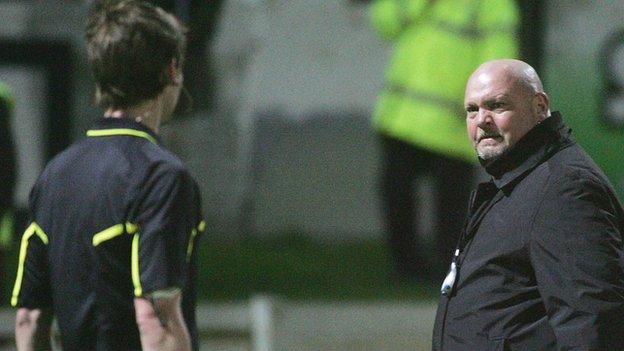 Linfield manager David Jeffrey has criticised referee Tomas Connelly after the 3-1 defeat to Derry City at the Brandywell in the Setanta Cup.

The Blues went out 4-1 on aggregate after the quarter-final second leg.

"The referee had a massive influence - we could have had goals, we had a surefire penalty and another opportunity," said Jeffrey.

Jeffrey was also unhappy with how his players were addressed and spoken to by match officials.

"Congratulations to Derry, I wish them all the best in the semi-finals," added Jeffrey.

"But for an analysis of the game lets be brutally frank and clear - the referee had a massive influence on it.

"We played tremendously well in the first half and there was a clear stonewall penalty on Peter Thompson.

"In the second half Philip Lowry takes the ball off the keeper, doesn't touch him at all, is about to put it into an empty net and he's not just penalised, he's booked."