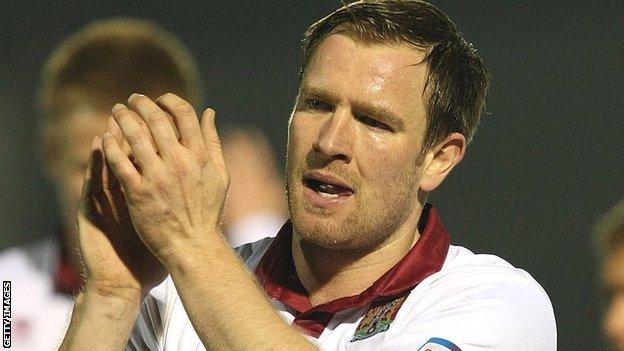 Northampton Town defender Kelvin Langmead says the difference in the squad from late February is "massive".

The 26-year-old scored the only goal in the win over Burton Albion, to secure the Cobblers' sixth victory in nine.

Langmead told BBC Northampton: "We've really knuckled down, there's a great team spirit and momentum is with us.

"I remember [on 28 February], with 10 minutes to go, all the results were going against us. You look at the table now and the difference is massive."

Langmead added: "To score a 92nd minute winner, [there is] just elation from the lads and the bench. It's a huge goal for us."

Aidy Boothroyd's side have climbed to 18th in League Two, five points clear of the relegation zone with a game in hand on the four bottom-of-the-table teams.

Langmead insists that it is no coincidence results have improved with the arrival of Clarke Carlisle on loan from Burnley.

"I think it's that Clarke's impact since he's been at the club has been fantastic. As a player and as a person, he's a joy to be around. He's brought the best out of everyone.

"Matt Duke has [also] been outstanding since he's been here. You look through the whole squad, it's strong squad and it's all coming together now."