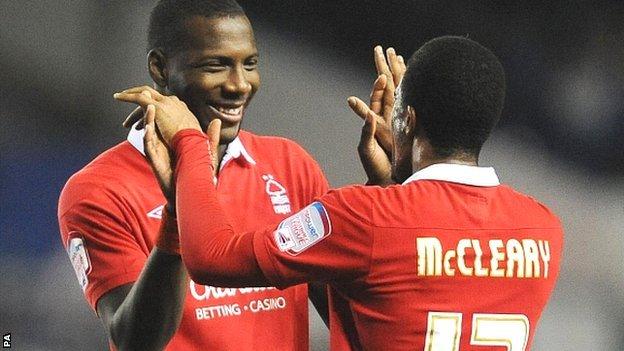 Nottingham Forest winger Garath McCleary says he was left in a bit of a daze by his four-goal haul in the astonishing 7-3 win at Leeds United.

McCleary grabbed the first hat-trick of his career in the thumping victory.

He told BBC Radio Nottingham: "The first one took two deflections, the second was a volley that I caught sweetly and the rest I can't remember.

They have scored 18 goals in nine matches since then, including seven goals in 73 minutes at Elland Road

Before Tuesday's win over Leeds, McCleary had scored just nine goals in 117 games for Forest

"After my second goal I didn't really know what was going on, but I continued to have a go."

The result sees the Reds move seven points clear of the Championship relegation zone following a run of four wins and a draw from their last seven games.

McCleary, 24, added: "We played brilliantly and it was brilliant to score four. We have a brilliant team spirit. It was a superb performance and it was my first hat-trick so it's very memorable for me."

Forest striker Dexter Blackstock, who scored two goals to take his season tally to five following an injury-ravaged 12 months, was quick to praise the in-form McCleary.

"He was superb," Blackstock said. "He had one of those nights where everything he hit he caught it clean and it went flying past [Andy] Lonergan. It was a great performance.

"He has been our main man and has helped get us out of the problems we have been in. He has scored some very important goals and some great goals.

"We settled well and I had a chance a couple of minutes in and hit the post. Their penalty call was a wake-up call. It shook us up and got us going. There was a belief there that we could score goals with ease.

"We have been threatening it for a little while and it just came together. I have never been involved in a game like that where so many shots have gone in. It was weird but we were clinical and came away with seven goals

"We have put a good run together. We have managed to claw our way away. We are not out of it and have to get to around the 50-point mark.