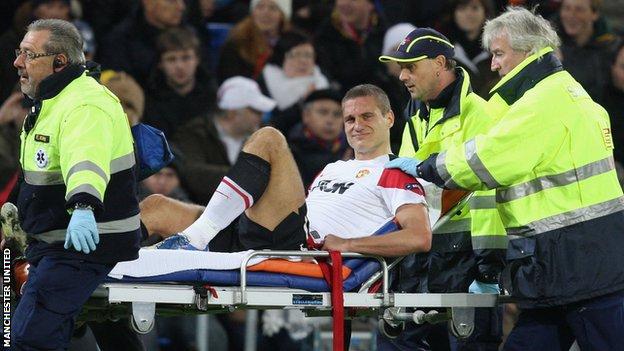 Nemanja Vidic has revealed that he is on course to end his long-term injury absence and return for Manchester United's pre-season training programme.

The 30-year-old-centre back has been sidelined since he ruptured a cruciate ligament during December's Champions League defeat by Basel.

"The projection was I would be ready for next season. I am on schedule and will hopefully start training in July."

Vidic has been confined to gym work since undergoing successful knee surgery over the Christmas period.

While he has been out of action, the United captain has watched his team-mates overtake Manchester City in the race to land the Premier League title.

Vidic believes the fact that the Manchester derby on 30 April is the only time United will face opposition in the top seven places in the table means they are in line to claim a 20th league crown.

"I've had the belief from the beginning," he said. "And, if you look at the schedule of the games we have left to play, I would like to say we are the favourites.

"We still have to win the nine games and need to be focused.

"We believed from the beginning and have the confidence but we have nine Champions League finals now I would say.

"It's all in our hands. We have to focus and give our best. All the players are ready to perform which is a good sign and a positive thing for the nine games ahead."