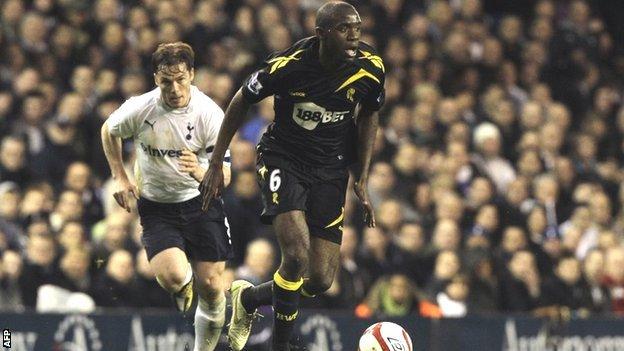 Bolton Wanderers will return to action on Saturday after Fabrice Muamba's family told the club they wanted them to go ahead and fulfil their fixtures.

The Premier League game against Blackburn Rovers will take place as scheduled, kicking off at 1500 GMT.

It comes as Bolton's club doctor revealed that critically-ill Muamba is continuing to show signs of recovery.

The 23-year-old remains in intensive care at the London Chest Hospital after suffering a cardiac arrest during Wanderers' original FA Cup tie against Tottenham last Saturday.

The game was abandoned after 41 minutes and there were even suggestions that Bolton may look to pull out of this year's competition.

Tuesday's game against Aston Villa was then postponed.

But manager Owen Coyle said on Wednesday: "We spoke together with the players as a group this morning and I talked with Fabrice's family last night.

"Fabrice's father Marcel and his fiancee Shauna were keen that we fulfil our fixtures.

"Once the players knew this, there was no doubt in our minds that we would play the matches."