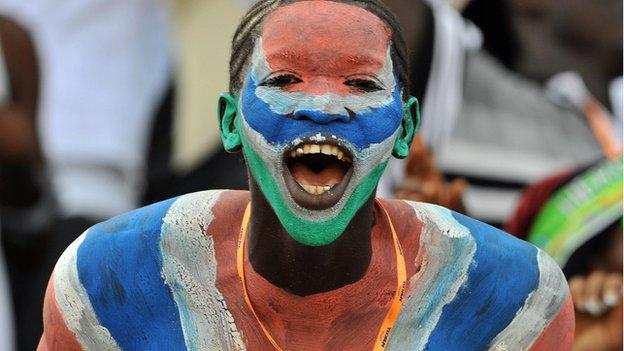 Brikama United official Bassiru Barjo has expressed relief at the Fifa ruling that has allowed The Gambia's teams to continue playing football.

On Saturday, a team founded in 2003 faces the biggest match in its history when hosting African title-holders Esperance in the Champions League.

"It was a very important decision that has taken place," Barjo told BBC Sport.

Fifa created a Normalisation Committee to oversee new elections in the Gambian FA after the latter's dissolution.

Despite the threat of 'severe sanctions' from Fifa should the decision stand, a meeting in Zurich on Tuesday created a path forward for the Gambian game.

While this clears the Scorpions to contest World Cup and Nations Cup qualifiers in June, the decision in the immediate future was more important for Brikama United.

Despite being only nine years old, the Gambian league winners knocked out Senegal's Ouakam in the first round of their maiden Champions League campaign.

Esperance, a club founded in 1919 and which has twice been crowned African champions, visit on Saturday for a match Barjo believes is the biggest in his club's short existence.

"We were founded in 2003 - a very young team compared to Esperance, who were founded in the early 1900s - so that's nearly 100 years' difference," said Barko, President of the Brikama Youth and Sports Committee.

"Esperance are the current club champions in Africa and Brikama is nowhere, so if we are playing Esperance at this level it is set to be one of the greatest days in our history."

Despite the gulf in years and experience, Barjo believes his side can pull off an upset - at least in the home leg of the second round tie.

"We still believe we can beat Esperance in Brikama. I know how well-prepared our boys are, and we are not distracted by the league, so I like to think the boys can do it," he said.

Brikama is a team that is owned by the town of the same name, but Barjo says support is not just coming from the diminutive town but from all across the West African nation.

"The whole town is excited about the match - and not just the town, but the whole of The Gambia," he explained. "We have moral and financial support from all ends of the country."

A crowd of some 10,000 is expected on Saturday, with the return leg set to take place in Tunisia on the weekend of 06-08 April.