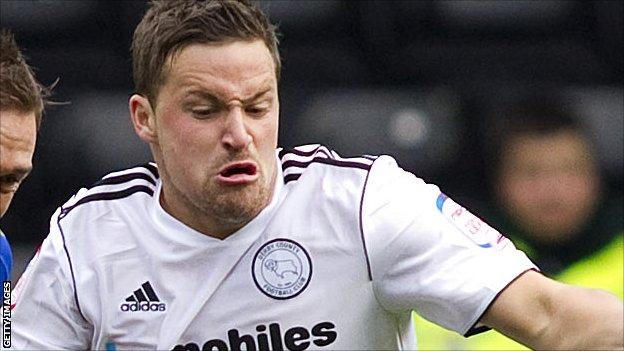 Scotland international striker Chris Maguire says he is relishing every minute of his loan spell at Portsmouth.

Maguire scored his first Pompey goal in Tuesday's 4-1 win over Birmingham City and the 23-year-old Derby loanee believes the foundations for a promising partnership have been laid.

"Luke Varney and I know what each other wants and hopefully we can bag a few more goals," he told BBC Radio Solent.

"The manager has given me a chance here and I'm loving every minute."

Maguire, who is on a one-month deal at Fratton Park, joined Derby from Aberdeen last summer and has scored two goals in eight appearances for the Rams.

Portsmouth fans have appreciated his application as well as his touch in front of goal, and Maguire said: "Anybody who has followed my career since Aberdeen knows I close defenders down and work hard for the team.

"Although I'm only here on loan it doesn't mean I'm not going to do that to help the team.

"As a striker to score a goal is always nice, it gives you a big lift, but I'm more delighted for the team and the fans. I've played the last two games, I'm here to help the team, and hopefully I can continue to do that."

The win against Birmingham saw financially stricken Portsmouth climb to within five points of Championship safety.