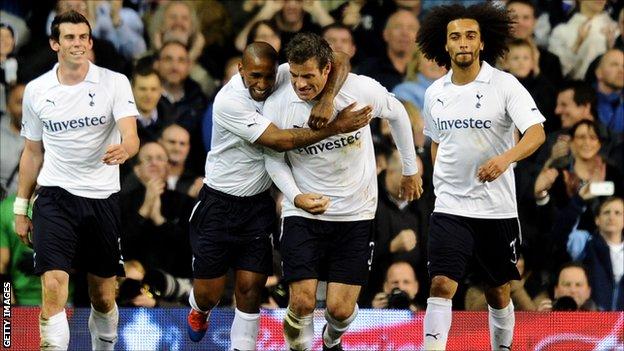 Second-half goals from Ryan Nelsen, Gareth Bale and Louis Saha sent Tottenham into the semi-final of the FA Cup, where they will face Chelsea.

But Saha sealed the win in injury-time with a turn and shot from 20 yards.

"Tottenham were scintillating at times. Modric pulled strings in the middle. The result really hides the superiority of Tottenham."

The rearranged game marked an emotional return to White Hart Lane for Bolton's players after the original fixture was abandoned when suffering a cardiac arrest during the first half.

Tottenham manager Harry Redknapp admitted that sentiment would go out of the window when the game kicked off, and his side were true to their word in a one-sided first half.

They ended the half with 11 attempts on goal, eight of which were on target, while Bolton failed to muster a single chance.

But despite their dominance the game remained goalless at the break, thanks largely to Bolton keeper Bogdan - who was in superb form.

He was called into action on numerous occasions, with his low full-stretch save from Scott Parker's close-range effort the pick of the bunch. Emmanuel Adebayor and Bale also tested him on more than one occasion.

Bolton were also dealt a blow midway through the half after midfielder Darren Pratley had to be stretchered off with a cut to his knee following a clash with Bale.

Tottenham continued to press for the opener and Rafael van der Vaart crashed a free kick against the bar shortly after the restart.

Ledley King was next to go close for the hosts heading Van der Vaart's cross over from close range as Spurs continued to pick Bolton apart at will.

Spurs had their best chance to take the lead on the hour, with Van der Vaart one-on-one with Bogdan after being played in by Adebayor. But Bolton's keeper saved well with his feet from the Dutchman's 12-yard strike.

Another fine save followed from Adebayor before Klasnic fired straight at Tottenham keeper Carlo Cudicini in the 71st minute - Bolton's first effort on target.

But with 15 minutes remaining Tottenham finally got the breakthrough their play deserved - with the goal coming from an unlikely source.

Having gone close seconds earlier with a header, Nelsen nodded home Van der Vaart's corner at the back post for his first goal for Tottenham.

Shortly after they doubled their lead, with Bale finishing off an electric Spurs break. Jermain Defoe provided the final pass to play in the Welshman who calmly slotted home from just inside the box with a lifted shot over Bogdan.

With seconds left there was still time for some drama - substitute Davies prodding home Klasnic's cross at the far post to rescue some hope for the visitors.

But Saha ended any thoughts of comeback with a fine turn and finish from 20 yards into the corner of the net deep into injury time, with referee Howard Webb blowing for full time shortly after.