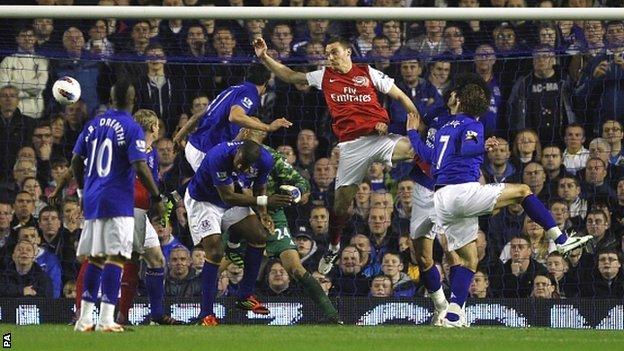 Arsenal boss Arsene Wenger has warned his players to remain focussed after snatching third place in the Premier League from rivals Tottenham courtesy of a battling 1-0 win at Everton.

The Gunners' victory at Goodison Park lifted them above London rivals Spurs for the first time since September.

"We have created momentum and we want to keep that going," said Wenger.

"Let's focus on the next game. We have to battle absolutely from the first to the last minute in every single game."

Arsenal have endured some difficult periods this season, including throughout January when they lost all three league games, to Fulham, Swansea and Manchester United.

However, their win on Wednesday was their sixth in succession in the Premier League, a run which has lifted them from seventh to third, closing a 12-point gap between themselves and Spurs - who drew 1-1 at home to Stoke on Wednesday.

"These players have always been brilliant even when we went through a difficult patch," added Wenger. "Confidence comes from the results. The belief is there, the confidence is there and the desire to fight."

Despite a superb opening 15 minutes at Goodison, during which Thomas Vermaelen headed the only goal of the game from a corner, Arsenal had to rely on their defence to keep Everton at bay.

In the last few weeks Wenger has been able to select a settled back five and this was clear to see in Merseyside.

Wenger concluded: "In January we had four full-backs out. Now, to have our defenders back, it changes the game."