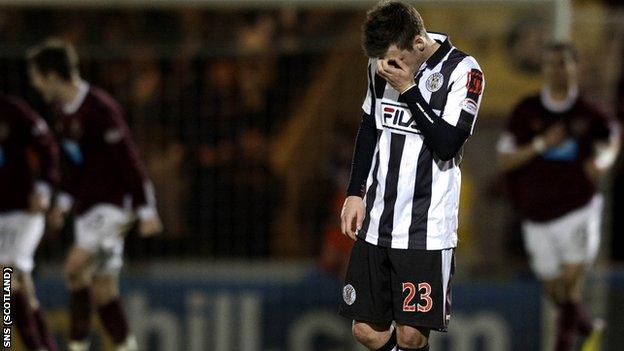 St Mirren manager Danny Lennon was aggrieved not to have had an early goal in the 2-0 Scottish Cup quarter-final replay loss to Hearts.

"I'm frustrated in terms of decisions going against us and the decisions we made for the goals we conceded," Lennon told BBC Radio Scotland.

"Referees can wait to see if there is an advantage to be gained."

Referee Stevie O'Reilly blew his whistle after spotting a handball from Marius Zaliukas as the Hearts skipper challenged Steven Thompson in the air.

When the ball bounced back off the turf, Hasselbaink reacted quickest to nod past Jamie MacDonald.

However, the keeper had the last laugh, saving expertly from Carey's spot-kick.

"I felt the goal should have stood," explained Lennon. "And that's not sour grapes after missing the penalty."

Lennon was also upset that Gary Teale was flagged offside when racing in on goal during an early spell of dominance from the Buddies.

And he thought his side had a claim for a second penalty when Andy Webster indulged in a spot of grappling with Thompson.

"Steven held the ball up very well and at that stage you don't know if they [match officials] maybe have a wee doubt in their head because they've already given one," said the manager.

Hearts full-back Jamie Hamill took advantage of a slack clearance to hammer in the opening goal on 31 minutes, while more poor play from the home side allowed Andrew Driver to cross for Rudi Skacel to tuck in a late second goal.

"It was a very good cup tie and it was a good opportunity missed," added Lennon.

"I'm gutted for the players and supporters.

"I thought we went about our business in a great manner, we put great energy into the game.

"We created chances but didn't get the breaks we needed."

With the season drawing to a close, St Mirren must now be content to play out their campaign in the bottom half of the Scottish Premier League, knowing they are safe from relegation.

But Lennon will not allow any slacking off as the Paisley side seek a first league win since a Christmas Eve success against Rangers.

"We must go into remaining games with that same desire and application, with an end product," he said.

"We need to stick together and keep believing in what we are doing and things will turn for us."