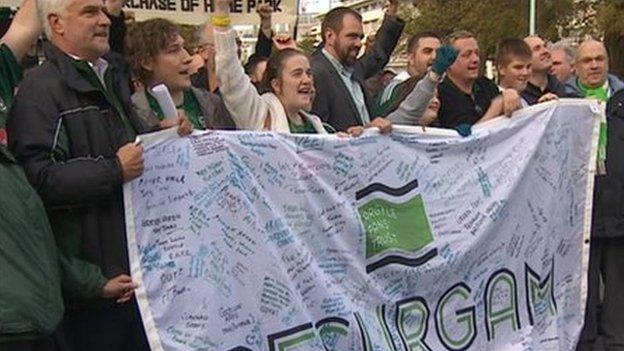 The firm which ran Plymouth Argyle while they were in administration says the actions of the club's fans put off a number of potential buyers.

The P&A Partnership made the statement in their notice of end of administration report filed with Companies House.

But his takeover only came about after preferred bidders Bishop International withdrew their interest.

"The Joint Administrators identified several alternative interested parties between August 2011 and October 2011 but all withdrew their interest following a campaign instigated by the fans," the report stated.

Administrator Brendan Guilfoyle threatened to quit in October after saying he and his colleagues had suffered abuse from supporters.

"Rather than hold their hands up and say they've got it wrong they wanted excuses and the fans were a convenient excuse."

Webb added that all the fans had done was to campaign for the best person to be given a chance to take over the club.

"If someone was genuine and had the interests of the club at heart and put their money on the table we would have supported them," he added.

"All these things were doing was pushing the club closer and closer to the abyss and we took action to stop that."

As well as detailing the £300,000 that Gibraltar-based consortium Bishop International paid for exclusive rights to buy the club last May, it also shows that the administrators charged time costs of £883,634.70.

The report also reveals the amount of money the club made from player sales as Argyle tried to keep their heads above water last summer.

Meanwhile Southampton paid Plymouth £150,000 for youth player Jack Stephens, as well as having a 10% sell-on clause, while fellow youth team player Lloyd Jones was sold to Liverpool for £20,000