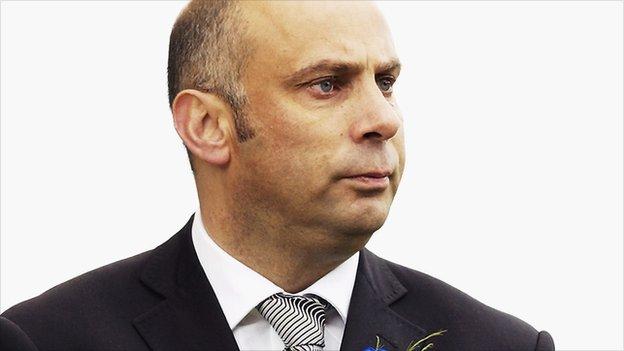 The duo, who have led the Cards to the top of Blue Square Bet South, have opt-out clauses in their current deals.

Smith told BBC Surrey: "Garry and Steve lie at the centre of the club's plans for the future.

"We are aware that other people have been talking to Garry, but Garry's not interested in that. He's interested in taking Woking Football Club further."

Smith added: "We're about to sit down and consider all the detail. The club should be confident that we retain their services for at least another year, and we're looking beyond that as well.

"The relationship is very healthy and there is continuous dialogue."

Hill has confirmed that both he and Thompson want to stay but, with the side closing in on a return to Blue Square Bet Premier, Hill says he needs to know a bit more about the club's future plans before signing a new deal.

"Steve and I are committed to the club," Hill said.

"But people have to understand that you've got to see what the ambition [of the club] is - if we succeed in winning the championship - to gain stability and build for the future.

"I just want everything focused on getting the club over the line and winning the league."

Woking were recently taken over by the Fans' Trust after former chairman Chris Ingram withdrew his funding, and Smith has confirmed that a blueprint for the club's future is already under development.

"The board have been looking at what the future looks like financially since December," Smith continued.

"We've tabled a draft budget and the success on the pitch has allowed us the benefit of looking at one or two scenarios, so we've started some of that background planning."