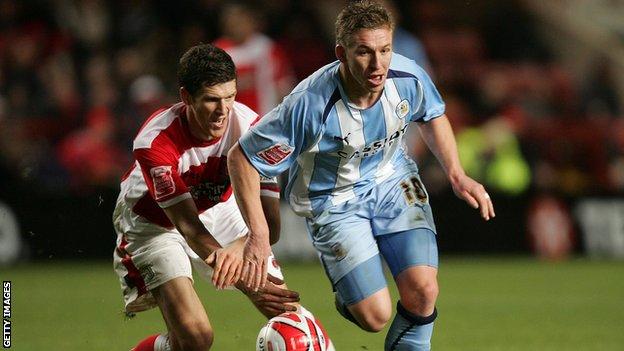 Striker Freddy Eastwood has returned to Southend on loan from Coventry City.

The 28-year-old Wales international's contract with the Sky Blues expires in the summer and he does not figure in their plans for the rest of the season.

"I always hoped that one day I would come back and play at Roots Hall again as I had some amazing times there," he told the Southend website.

"It has come a bit sooner than I probably thought but the club are on the brink of having some good times again, so I can't wait to help them get promoted."

Eastwood began his career with West Ham and moved on to Grays Athletic before joining the Shrimpers in 2004, initially on loan.

He was on target for the Shrimpers in the 2-0 win over Lincoln in the 2005 League Two play-off final and the following season scored both goals in a 2-2 draw with Swansea which sealed a second successive promotion.

In between, he also grabbed the only goal in a famous Carling Cup victory over Manchester United.

Eastwood was unable to repeat his scoring feats and left for Coventry in July 2008 for a fee of about £1.2m.

But despite the Sky Blues struggling to avoid relegation from the Championship, they have now decided he is surplus to requirements.

"There is little point in Freddy sitting around here when he could be playing first-team football somewhere," said chief executive Tim Fisher.

Southend currently lie fourth in the League Two table, nine points adrift of leaders Swindon, but only one behind Shrewsbury in the third automatic promotion spot.

"I had a really good relationship with the fans last time and hopefully I can give them something to smile about this time, so it will be a win-win situation," Eastwood added.

"The manager at Coventry hasn't really played me this season but I haven't had any serious injuries or anything, so I'm eager to get going."