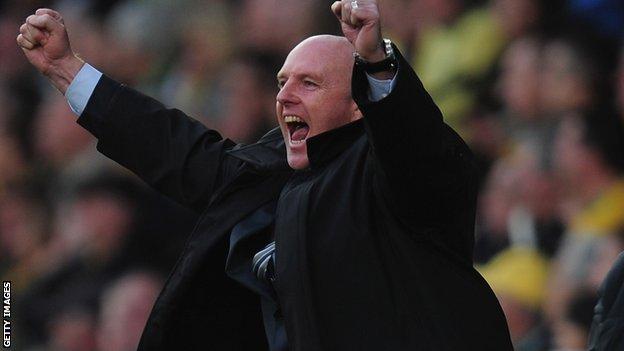 A fans' group behind protests at Blackburn Rovers this season says it would be "football suicide" to keep Steve Kean as manager, despite the club's upturn in form.

The comments of Glen Mullan, an organiser for the BRFC Action Group, underlines the battle Kean is still facing to win over the doubters.

Since defeat by Bolton left Blackburn bottom of the table five days before Christmas, Rovers have won five matches and drawn three of their last 12 in the league.

Mullan, former Blackburn striker Kevin Gallacher and Lancashire Telegraph sports editor Andrew Cryer, whose paper called for Kean to be sacked in December, give their views on whether the Scot can ever convince supporters that he is the man for the job.

How has the form been turned around?

Gallacher: The players are starting to believe in themselves a bit more. Steve Kean has kept them going and they've started getting results. But it's early days because the results have been against teams we should be getting results against.

Mullan: There are still nine games to go, and many twists and turns. [Beating Sunderland on]Tuesday brought about the first back-to-back wins Kean has managed in 50 matches, but 28 points from 29 games is a very poor return. Blackburn's upturn in fortunes has coincided with the arrival of Eric Black as assistant manager, but supporters are not getting carried away.

Cryer: A number of young players have been blooded into the first team and they have brought a "no fear" mentality onto the pitch. Junior Hoilett has been a key figure in their recent improved results and you fear they face a fight to hang on to him next season.

Gallacher: I think they will and have always believed that because there is talent at the club. Out of the five teams at the bottom of the table, I think Blackburn are the best side.

Mullan: Five sides are fighting for their lives, and one thing which is evident at Rovers is that the players appear up for it. I honestly believe there are three worse teams at present, and Rovers will survive, but this will not mask the bigger issues.

Cryer: Blackburn will survive from here. It is very difficult to see how their relegation rivals will pick up the points needed to overhaul them. Rovers have players who can win matches in Yakubu and Junior Hoilett, with their rivals lacking individuals who carry such a threat.

Can Kean ever win over the doubters?

Gallacher: I think he's had a very tough year and he needs someone in to help him in the chairman role and then they can progress. But if Steve continues with the job and can get results, I'm sure that's when the fans will start to accept it. There are things a little bit deeper, such as the supporters not getting information from the owners, and in that sense I think it's going to be tough to do that totally.

Mullan: Steve Kean will never win the majority of the fans over. Supporters not only want Kean to go, but for Venky's to go with him. It would be football suicide for Venky's to retain Kean after he has twice taken us to the brink of relegation. New owners with a genuine interest in Blackburn must also be sought.

Cryer: Having heard their manager and owners talk about top-10 football and a challenge for Europe, many believe just staying in the Premier League should not be regarded as a success. It will take more time, with evidence of a sustained improvement, for Kean to prove to everyone he is the right man to help Rovers progress.