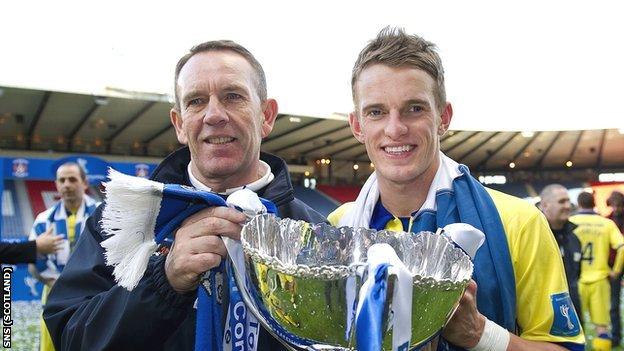 Manager Kenny Shiels described as "a great emotion" the feeling of giving the Kilmarnock fans something to celebrate with their League Cup win.

"To see what it means to Kilmarnock and the outlying area - it's unbelievable," said the Northern Irish manager of his team's 1-0 win over Celtic on Sunday.

"I can't put it into words how much that means to me, for them.

"You make a contribution and they bounce that back to you in appreciation. They're a great bunch."

Shiels was stunned at , as he collapsed and died from a suspected heart attack.

Understandably, he struggled to convey his thoughts in post-match interviews, saying he was "all over the place".

Having had a few days to assess the cup win, he told BBC Scotland: "Inside you feel good, because it's a fantastic achievement to beat a team like Celtic in a cup final.

"It was unbelievable on Sunday night."

The Killie squad made their way down the M77 after the game and boarded an open-top bus to tour the town centre on their way to Rugby Park where fans had gathered to hail their heroes.

"I think it was important that we still celebrated for the fans and everyone who had waited so long for that trophy," said midfielder Lee Johnson.

"To bring it home to Kilmarnock fans on the open-top bus was some night.

"The fans were just elated. I am proud that I helped to deliver some silverware."

On the death of his team-mate's father, Johnson added: "I have only been here a short time but already it feels like a mini family.

"When something like that happens to one of you, it demoralises you."

Shiels, who celebrated a 12th trophy as a manager, dismissed talk of him being a candidate for manager of the year, with that Hampden success.

"It hasn't even entered my head," he said.

"I think a club of the year would be more appropriate, because how do you measure a manager of the year?"

The manager's next task is to focus his team's attention on the visit of Champions League-chasing Motherwell.

"We have a really tough game on Saturday," said Shiels, who accepts that seventh place is as best as his team is likely to achieve in the Scottish Premier League.

"We have a lot of players missing and it puts us in a difficult position.

"We have seven players out; three of them are centre backs, which makes it difficult."