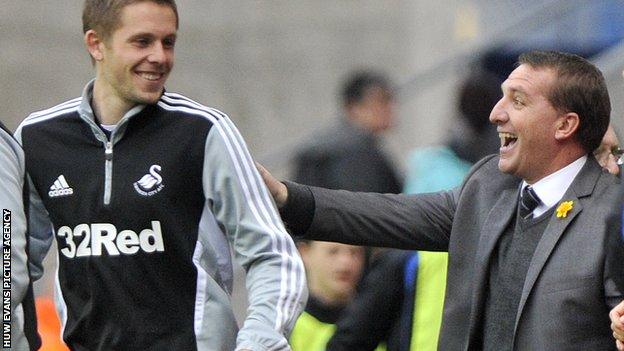 Manager Brendan Rodgers has said Swansea have yet to contact Hoffenheim to discuss the possible transfer of Gylfi Sigurdsson.

Sigurdsson joined Swansea in January until the end of the season and has scored five goals in nine Premier League games.

Hoffenheim are thought to be keen to have the ex-Reading player back for the start of next season.

"We've been unable to sit down and discuss anything," said Rodgers.

"Until that happens, the situation remains the same.

"He's had a wonderful effect on the group and I know he thoroughly enjoys it here.

"He fits in perfectly to our style and we both complement each other. We'll see what happens between now and the end of the season."

The Iceland international has impressed during his loan spell and added two further goals to his tally in Swansea's 3-0 win over Fulham.

Rodgers said another on-loan player, Steven Caulker, will return to Tottenham Hotspur at the end of the season.

Caulker has spent the season with the Welsh club but Rodgers has ruled out a permanent switch to the Liberty Stadium.

"He's one that's held in very high esteem there [Tottenham]," said Rodgers of the 20-year-old defender.

"His plan was always to go out [on loan] and go back. He's had a great grounding here.

"There's certainly nothing set in place for him to come in as much as we would love it."

The Wales player missed the 3-0 win at Fulham, bringing an end to a run of playing in 169 consecutive league games for the Swans.

"It looks like he'll be fine," said Rodgers. "He looks and feels a lot better than what he was at the beginning of the week. He's been back in training.

"He's been a terrific performer for us and to go three-and-a-half years without missing a league game is incredible."