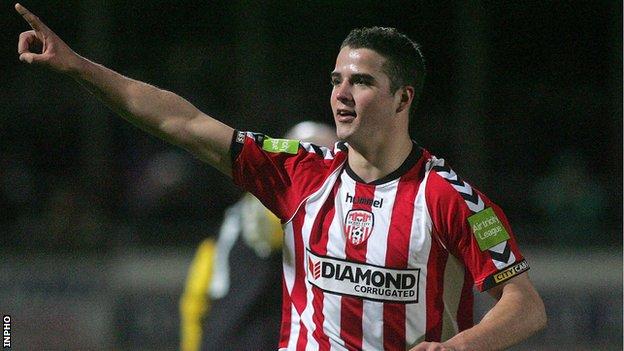 Derry City built on the momentum of Tuesday's win over Linfield as they beat Cork City in Friday's Airtricity League Premier Division clash.

Both sides had first-half chances with Mark Farren having an effort cleared off the line and Cork's Daryl Horgan hitting the Derry woodwork.

However, Farren put Derry ahead on 49 after a superb Barry Molloy pass.

After a quiet opening to the game, McLaughlin headed the ball to the Cork net on 18 minutes but the effort was ruled out for apparent pushing in the box.

Cork's Danny Murphy broke through the heart of the Derry defence three minutes later but, with only keeper Gerard Doherty to beat, he sliced badly wide.

As the pace continued to pick up, Farren rounded McNulty on 31 minutes but Dan Murray got back to clear off the line.

Cork's best attempt of the night then came three minutes later as Horgan lashed against the Derry woodwork.

Patrick McEleney showed some lovely touches before half-time but his superb approach work was not finished off by the Derry attackers.

However, Derry took the lead four minutes after the restart as Farren latched on to Molloy's superb through ball and coolly slotted past McNulty.

The Cork keeper did well to block a McEleney free-kick but was then at fault for Derry's second goal as he completely missed a long, hopeful punt upfield allowing McLaughlin to poke into an empty net.

Cork rarely threatened thereafter with Derry's most nervous moment when a corner hit the home woodwork.