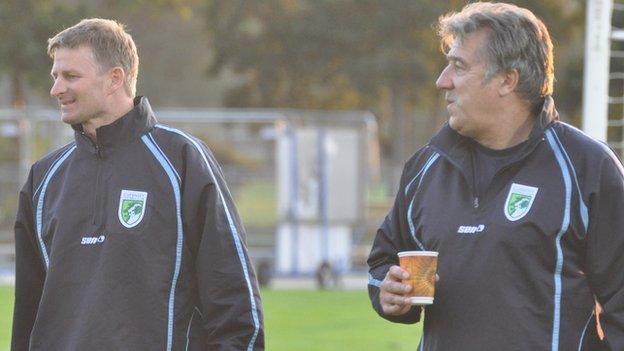 Guernsey FC boss Tony Vance says picking a squad for the top-of-the-table clash with Bedfont Sports is his hardest decision of the season.

The Green Lions will take the Combined Counties League Division One title if they can win at Footes Lane.

"It is without doubt the toughest squad I've had to pick," Vance said.

"Myself and Colin Fallaize have spent about two hours talking about it and disagreeing and agreeing, but eventually we've got there."

He added: "It's a harsh job for me to do and I don't take those decisions lightly."

Vance's job was made even harder after an experimental line-up thrashed Bookham 7-0 last week, as many of Vance's established first team players were called up by the Guernsey island side for the Muratti semi-final in Alderney.

And while Guernsey know that victory would see them win the league in their first ever season in English football, Vance says his side must still focus on beating Bedfont Sports.

"We need to keep our feet on the ground, we know what we need to do.

"Bedfont will be all over this game and will want to spoil the party, that's their style of play, they're a very competitive and physical team and they'll be wanting to beat us in our own backyard."