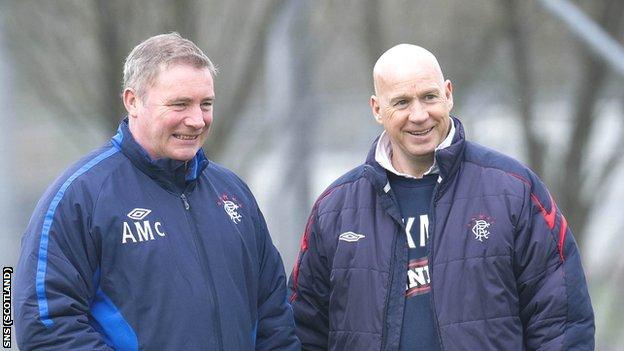 Rangers manager Ally McCoist is not contemplating defeat by Celtic when they visit Ibrox on Sunday, where their rivals could potentially win the title.

If Motherwell fail to beat Kilmarnock on Saturday, Neil Lennon's side can clinch the Scottish Premier League if they defeat Rangers the following day.

"We've had problems with injuries and suspensions, but we believe we can win on Sunday," said McCoist.

"We want to give the fans something to shout about."

And he added: "They have been fantastic in the past few weeks and I'm sure they will be again."

Although McCoist was able to start with seven full international players in his team's last outing, the 2-1 loss to Dundee United at Tannadice last Saturday, the line-up was far from being at full strength.

Rangers will be boosted by the return from suspension of central defenders Dorin Goian and Carlos Bocanegra, while Steven Whittaker, Sasa Papac and Kyle Lafferty returned to training this week.

Pulling on the shirt gives you pride at the best of times, but when you play against your closest rivals it's massive

The Ibrox side have been short of striking options since the departure of Nikica Jelavic added to the absence through injury of Steven Naismith.

On the possibility of Northern Ireland striker Lafferty beginning the match, McCoist said: "I'm not saying that he won't start, but he has not played in some time.

"I think you can maybe get away with that in the defensive positions, but maybe not up front, especially as he is so mobile."

McCoist insists Motherwell's result at Rugby Park will not have a bearing on the Old Firm game from his own team's perspective, though it would surely sharpen Celtic's desire.

The Rangers boss and veteran midfielder Lee McCulloch acknowledge that Celtic, 21 points ahead with eight games to go, are favourites but McCoist pointed out that underdogs Kilmarnock beat Celtic in the Scottish League Cup final last Sunday.

"Looking at recent results, you've probably got to look at Celtic as favourites and rightly so," said the versatile player.

"Sunday is just about us getting some points on the board.

"It'd be great to give the fans something to shout about. We need to go out, be confident and to try to get a result."

Both say Rangers will be out to prove a point in the match.

"Pulling on the shirt gives you pride at the best of times, but when you play against your closest rivals it's massive," said the manager.

On off-field matters, with Rangers' administrators having received four bids for the club, McCoist revealed he met prospective buyers Brian Kennedy and Paul Murray this week and was "very impressed" with what they had to say and felt sure they had the best interests of the club at heart.