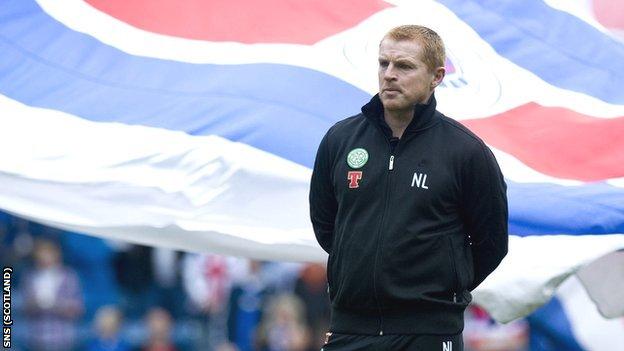 Celtic manager Neil Lennon insists his team "won't be there to gloat" should they beat Rangers at Ibrox on Sunday.

If Motherwell drop points at Kilmarnock on Saturday then Celtic will win the Scottish Premier League title if they defeat their old rivals the next day.

"The last thing we want to do is rub it in people's faces. We will be respectful of everyone at the stadium," said Lennon.

Police have spoken to both clubs this week about their conduct at the game.

Celtic last won the league title at Ibrox in 1967.

If the Steelmen draw or lose against Kilmarnock at Rugby Park, then Celtic can win their first league trophy since 2008 with three points at Ibrox.

However, they may have to do so without winger James Forrest and striker Gary Hooper, who are nursing injuries.

The Celtic boss added: "We had the police up on Wednesday. We had a chat with the head of the police organisation about the game on Sunday but not with regards post-match celebrations.

"I think he just wants to make sure that the game goes as well as it possibly can go, which I totally understand."

He described as "criminal" referee Willie Collum's decision not to award Celtic a penalty in the closing moments when Hoops striker Anthony Stokes went down in a challenge from Killie defender Michael Nelson.

Lennon said he "absolutely" stood by his comments.

"I am looking forward to giving him my response, I've got until the 30th of March to do that," he said.

"I will submit my response next week.

"I don't think I need to [explain] but obviously they do and I will state my case."