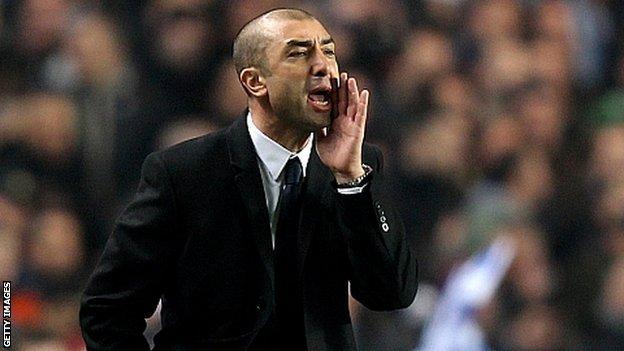 Chelsea interim boss Roberto di Matteo says his team's attempt to finish in the top four will be all but over if they lose to Tottenham on Saturday.

The Blues are fifth in the Premier League table, having slipped five points behind fourth-placed Spurs after losing to Manchester City on Wednesday.

"A win would give us a big, big lift," Di Matteo said. "But if we manage to get a draw, I think we're still in it.

"If we lose, I think it will be very difficult afterwards."

Di Matteo had steered the Blues to four straight wins in three different competitions since taking over from sacked coach Andre Villas-Boas.

But the 2-1 defeat by City leaves them needing to take something from the Spurs game at Stamford Bridge to stay in the running for the Champions League qualifying spots.

Chelsea also face trips to third-placed Arsenal and seventh-placed Liverpool before the end of the season.

Di Matteo added: "Mathematically, it is still possible so we will fight until the end but we are looking to have a good game on Saturday.

"Certainly, we have the most difficult schedule and fixture list until the end of the season compared to the other teams.

"We have all the resources that we need to be able to challenge."