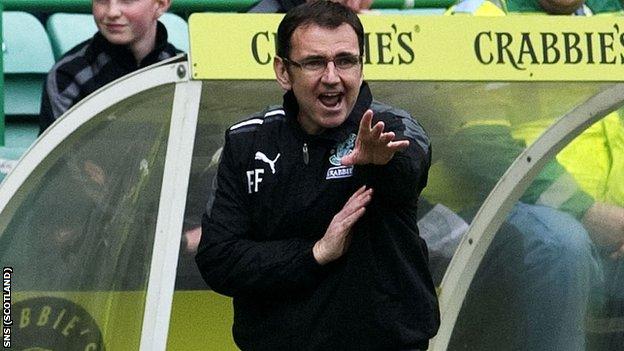 Hibernian manager Pat Fenlon says his players are suffering from lack of belief after losing 2-0 to Dundee United at Easter Road.

Two second-half goals gave United a boost in their bid for European football and left Hibs three points off the bottom of the Premier League table.

"In the first half, we played quite well, but we didn't come out in the second half," said Fenlon.

"We didn't show enough desire to win the game."

The defeat was Hibernian's second in a row and keeps them in 11th place in the table, a position they have not climbed above since December.

When something goes against us, we lose that belief in ourselves and that's what we've got to change in the players

Johnny Russell fired the visitors ahead midway through the second half and Gary Mackay-Steven claimed United's second with a shot that squeezed past goalkeeper Graham Stack.

"We've got to realise that we're in a major scrap," said Fenlon. "We've got to keep working hard, that's all we can do.

"We thought the last three or four weeks, when we've picked up some decent results and we got ouselves into the semi-finals of the cup, it should give poeople confidence, but when we come here, we seemed to be devoid of that.

"When something goes against us, we lose that belief in ourselves and that's what we've got to change in the players.

"They're edgy, there's nervousness, there's no doubt about that.

"But here, when we concede the first goal, we lose our shape and we drop back into ourselves and we lose confidence."

Hibs now face an away trip to Inverness Caledonian Thistle and host Motherwell in the final match before the league splits, which could prove crucial in the club's fight to survive in the top flight.

Fenlon admits his side have played better away from home and recognises his players have a task ahead of them to avoid the drop.

"We've performed better on the road. It's maybe the relief from not playing in front of their own supporters because I know they are edgy as well. I can totally understand that," said Fenlon.

"The club is in a dogfight, so you understand people being frustrated.

"We knew it was going to be a scrap. We're here to make sure we stay in the league.

"One thing I never went away from is a fight. We have to make sure everybody else realises that we're in a scrap."