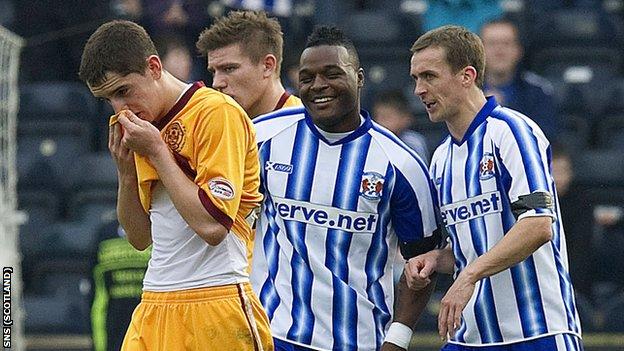 Motherwell manager Stuart McCall said his players failed to mount any kind of challenge in their 2-0 defeat by Kilmarnock at Rugby Park.

"We didn't do anything to trouble Kilmarnock. They fully deserved the victory today."

Paul Heffernan gave Kilmarnock a second-half lead after going one-on-one with Motherwell keeper Darren Randolph, then the Irishman netted from the spot after Tom Hateley handled in his own box.

It was a hugely sub-standard performance, especially in front of a huge support we brought down with us, so I apologise to them

The Steelmen failed to respond and now remain in third place, level on points with Rangers and eight points ahead of fourth-placed Dundee United.

"I thought at half-time we needed to up it a little bit," said McCall.

"We did okay in the fitrst half without carrying a great threat. I expected more in the second half, but we just didn't produce it.

"I can't be over-critical, because the consistency they've shown this season has been outstanding.

"But, if we're not at it all over the park, we're an average side and today we were very poor.

"I can't put my finger on it and the lads can't. It was a hugely sub-standard performance, especially in front of a huge support we brought down with us, so I apologise to them.