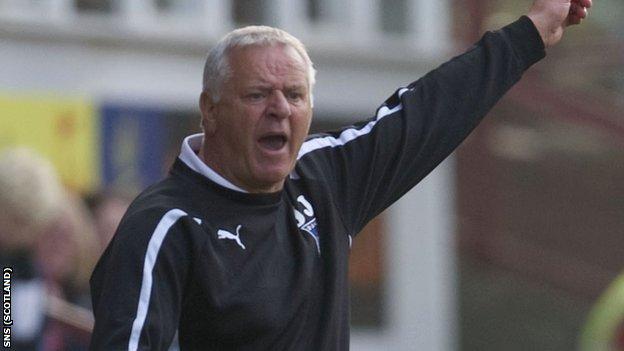 Joe Cardle's equaliser secured a point for the Pars in their bid to climb off the bottom of the table.

"In the coming days and weeks, I'll be trying to avoid taking chances and lay a few ground rules," said Jefferies.

"It's okay when you're halfway up the table, but when you're down here, you don't take risks."

The players have 100% commitment, desire and will to do it, but there has to be a bit more quality and bit more savvy in some of the things we do

Steven Thomson headed St Mirren ahead on 38 minutes, but Cardle bundled in the equaliser a minute after the restart to put Dunfermline within three points of 11th-placed Hibs.

With just two matches remaining before the league splits in two, Jefferies feels his players are capable of earning an elusive home win and overtaking the Edinburgh side, who lost 2-0 to Dundee United at Easter Road.

"We came out at the second half and changed it a bit and the quick goal galvanised us a bit," said Jefferies.

"But we got a point and, when your nearest rivals don't get any, you're a bit closer, but we've still got a big game ahead of us against them.

"The players have 100% commitment, desire and will to do it, but there has to be a bit more quality and bit more savvy in some of the things we do.

"We said we would keep the ball down and pass it and not play long balls. We were giving the ball away with their passing. They need to get the ball wide and get it into the box.

"We're a point better off and there's a lot of games still to play. With two games until the split, we need to hang in there and do what we can. Hopefully, we'll do it."