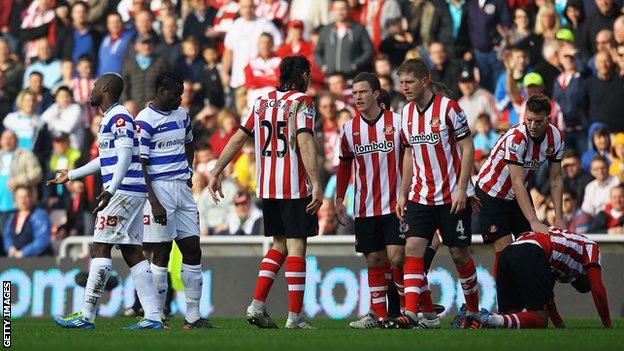 Mark Hughes criticised striker Djibril Cisse for the 'crazy' challenge that saw him sent off as QPR slipped back into the relegation zone.

Cisse was dismissed for the second time in four appearances after an ugly tackle on Sunderland substitute Fraizer Campbell with QPR trailing 1-0.

They are now one point from safety after losing 3-1, with Sunderland old boy Cisse facing a four-match ban.

"It was a crazy challenge by Djibril," said Hughes. "And he knows it."

Former Liverpool striker Cisse, who only joined QPR at the end of January, was also sent off on his Rangers home debut in the 2-1 home defeat to Wolves on 4 February.

He is now set to miss the London derby with Arsenal at Loftus Road on 31 March, as well as the trip to title-chasing Manchester United on 8 April.

The 30-year-old is also likely to be sidelined for the home game with Swansea on 11 April and the trip to West Bromwich Albion three days later.

Cisse has now netted in three of his five games for QPR - and been sent off in the other two.

"That's going to hurt us," said Hughes, "because when we have been able to keep him on the pitch he has been excellent for us.

"He has scored three in five, but we can't really dwell on it. It's spilt milk from our point of view. We have got to get on with it. I have got to focus on the personnel who are available to me.

"The sending off obviously compromised us but, in fairness, even if he had still stayed on the pitch, I don't think we would have won because we didn't start in the right manner and didn't do the right things on enough occasions.

"If you don't do that at Premier League level, you lose, certainly at places like Sunderland."

I can't believe this. Red cards. Nothing to do with luck . Very frustrating

Asked if the former Sunderland loan striker had apologised, Hughes said: "That's in the dressing room. We don't have to go into that. But, suffice it to say, I wasn't too delighted."

Midfielder Joey Barton was dropped from the starting line-up after being booed by his own club's fans in the 3-2 midweek win over Liverpool.

"Joey didn't have the best of nights but he took the decision the way I expected him, with good grace," added Hughes, who received a vote of confidence from QPR owner Tony Fernandes.

"The manager can do nothing if players keep getting sent off and booked," Fernandes said on Twitter. "Mark Hughes is the right guy and he has my support."

But Fernandes was scathing of the disciplinary problems which have dogged the club throughout Hughes' short reign.

Cisse's dismissal was the third red card since the former Manchester City manager took over in January.

"I can't believe this. Red cards. Nothing to do with luck. Very frustrating," wrote Fernandes. "Crucial is for us to win home games. But boy we do make it dfficult."