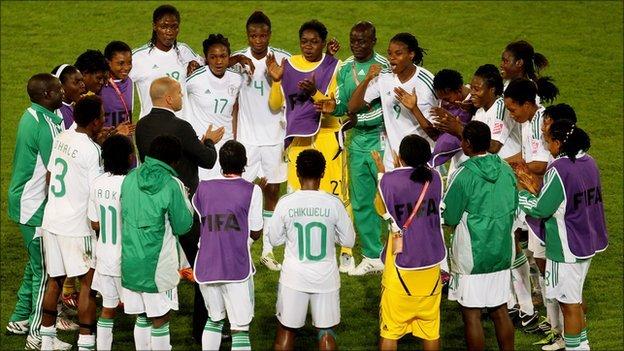 South Africa will host a game on 30 May with the second in Nigeria on 23 June.

The Nigeria Football Federation (NFF) says the games fit in with both team's upcoming travel plans.

"We have a 2012 African Women's Championship qualifier against Zimbabwe on 27 May so it's easier to get to South Africa from there," NFF spokesman Ademola Olajire told BBC Sport.

"South Africa are also facing Zambia in a similar qualifier and will travel to Nigeria after that game [the second leg scheduled for 1-17 June), for the second leg of the friendly."

Nigeria beat South Africa 2-1 when the teams last clashed in an African Women's Championship group game in Johannesburg in November 2010.

The Super Falcons went onto win their sixth African women's crown in South Africa beating Equatorial Guinea 4-1 in the final.

However the Nigerians failed to qualify for the Olympics while South Africa are heading to their first ever games in London later this year.

Meanwhile, the NFF executive is expected to ratify the recommendations of its technical committee on the appointment of a technical director on Thursday.

Interestingly, Belgian Tom Saintfiet was the only man interviewed for the role.

The new technical director is to design and oversee the West African country's developmental programmes, including coaching and football at grassroots.

"A new technical director as well as other coaching appointments will be announced next week after the board meeting." said Olajire.

It will be Tom Saintfiet's fourth African job after coaching stints with Namibia, Zimbabwe and Ethiopia.