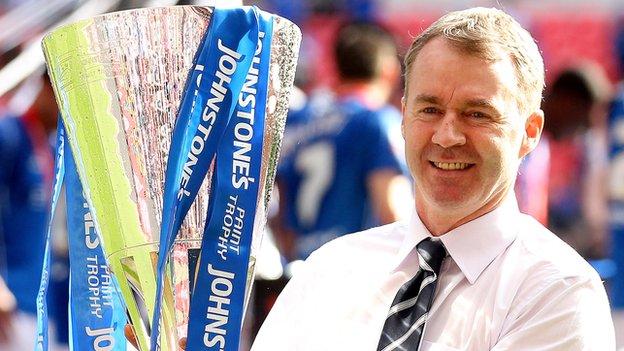 Chesterfield manager John Sheridan has admitted he would "sacrifice" their victory in the Johnstone's Paint Trophy final if it meant they could keep their League One status.

The Spireites beat Swindon Town 2-0 at Wembley on Sunday to lift their second piece of silverware in as many seasons.

But they are currently languishing at the bottom of League One, seven points from safety.

"I'd sacrifice this afternoon to stay up," Sheridan told BBC Sport.

"If we'd have won all our games like we did in the Johnstone's Paint then we would be safe by now. I'd have taken a loss today to stay up.

"It's great for the fans and it's a trophy - I won't disrespect it. But I know where my loyalties lie and I'm desperate to stay in the division.

"I think we're good enough and we've got to believe we can do it."

Chesterfield, who were promoted as champions last term, now have eight games to turn their season around - and Sheridan believes their victory over League Two leaders Swindon will give them confidence.

"I'm very proud of everyone involved in the club," he added. "It doesn't matter what competition you play in, to come and win a final and pick a trophy up can only do you good.

"I don't think it will do us any harm. I said to my players at half-time 'you need to belief in yourself more often'.

"The league run was always in the back of my mind but I enjoyed the occasion and I'm really pleased for the players."

"Today we proved - in a game which I gave the title win or die - it was too difficult," said the Italian.

"I am a young manager, I have to improve. The players are the protagonists but the person responsible is Paolo di Canio for sure.

"I'm sad because because when I saw my players struggling and they didn't have the energy to go on to win the cup.

"The way the defeat came in the second half made me even more sad. In the first half we dominated but we weren't capable of taking our chances.

"We next play at home and that is our fortress, so I don't worry. It is a local derby [against Bristol Rovers] so a lot of people will come and support my players.

"These players have the energy and the personality over a season. It will not affect us."