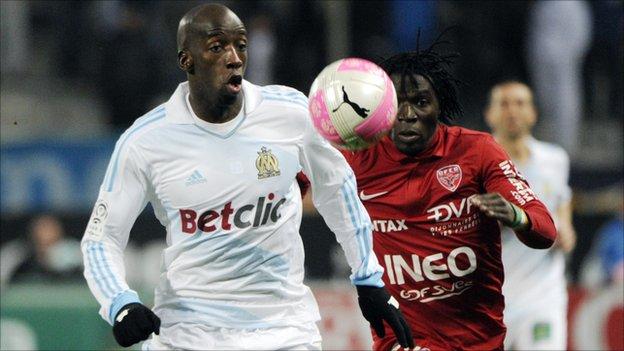 Senegal and Marseille defender Souleymane Diawara's season is over as he faces an operation on his torn anterior cruciate ligament in his right knee.

He was injured during Saturday's 1-1 draw at Nice and left the ground on crutches, his the club revealed the full extent of the problem on Monday.

Marseille added he is set to be sidelined for six months.

The Teranga Lions, who reached the quarter-finals of the 2002 World Cup in Asia, begin their Group J campaign by hosting Liberia on the first weekend of June.

They then travel to play Uganda a week later, Angola are the other team in the group.

He could even struggle to be fit for Senegal's 2013 Africa Cup of Nations qualifiers set for early September.

It is a further blow for Senegal's defence following last week's news that Kader Mangane and Pape Diakhite, are also out for the rest of the season with serious injuries.

It is unclear whether either of them will recover in time for Senegal's opening World Cup qualifiers in June.

Diawara was already suspended for the first leg of Marseille's European Champions League quarter-final at home to Bayern Munich on Wednesday but will miss the rest of their campaign in the tournament.

He also misses the French League Cup final against Lyon on 14 April.

Marseille's draw at Nice ended a club record run of seven defeats in all competitions but left them 13 points off the pace in the battle for Champions League qualification.