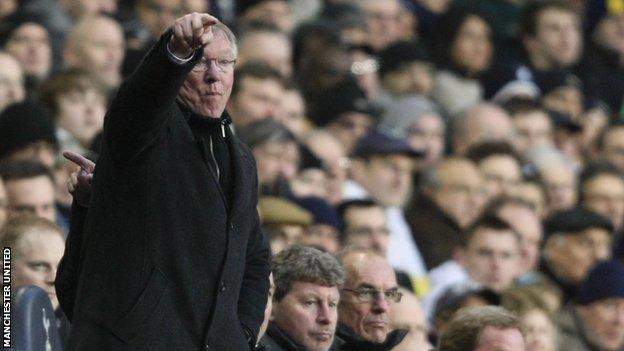 United can go three points clear if they beat Fulham on Monday night.

"We are in the right place, at the right time and, most importantly, with the right players," the 70-year-old manager told United Review.

"It's neck and neck now and I'd say it was an ideal time to be up with the leaders with only nine matches to go."

While City currently top the table on goal difference, their 1-1 draw with Stoke City at the Britannia Stadium on Saturday has given United a chance to open a gap when they play at Old Trafford on Monday night.

"After weeks trailing in second place, we got our noses in front," Ferguson continued.

"I am sure our players are ready to put the pressure on again.

"Our guys have been flogging away and perhaps wondering if they would ever catch up before we hit the finishing line.

"Well, we did and they are capable of going in front again. It's neck and neck now and I'd say it was an ideal time to be up with the leaders with only nine matches to go."

After suffering with a succession of injuries during the winter, Ferguson now has the vast majority of his squad to call on for the final stretch.

Winger Nani and striker Michael Owen are set to further boost the Scot's options when they return to training this week.