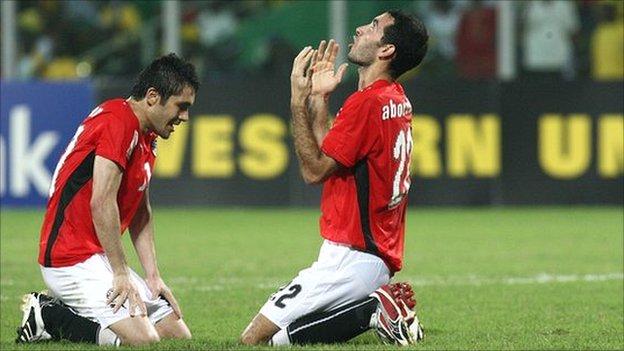 Mohamed Aboutrika has been named in Egypt's national squad just a month after saying he was quitting football.

The Al Ahly star announced his retirement from football in the wake of the Port Said tragedy, where 74 fans lost their lives.

However, he has now been named in the squad of American coach Bob Bradley shortly after returning for his Cairo club in the African Champions League.

Egypt will play friendlies against Chad and Uganda in Sudan later this month.

Bradley has named a 27-man squad for the training camp preparing for June's World Cup and Africa Cup of Nations qualifiers.

Players from both Al Ahly and Zamalek will only participate in the game against Uganda on Thursday, as they have Champions League commitments to fulfil.

This means Aboutrika - who has been called up by Bradley for the first time - will miss the Chad clash on Saturday 31 March.

Al Ahly, six-time African champions, play the return leg of their clash against Ethiopian Coffee on 06-08 April, with the game balanced at 0-0 after Sunday's first leg.

There is no place for midfielder Ahmed Hassan though, as the world's most capped player failed to make the squad.

Egypt, who failed to qualify for the 2012 Nations Cup despite winning the three tournaments preceding it, will play four vital qualifiers in June.

They open their World Cup campaign at home to Mozambique and away in Guinea on the first two weekends, before completing a home-and-away second round Nations Cup clash with Central African Republic.