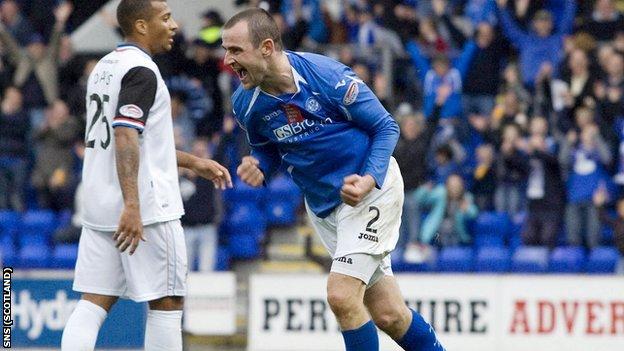 St Johnstone defender Dave MacKay believes qualifying for Europe would be "a massive boost" for the Perth club.

Saints are level on points with fourth-place Dundee United but have a game in hand over the Tangerines, who have a superior goal difference.

"It'd be lying to say we haven't thought about it, we've been up there [challenging] most of the season."

A trip to Inverness on Wednesday gives St Johnstone the chance to move three points clear of United with seven rounds of Scottish Premier League fixtures to play after that.

Hopefully we can secure a European place come the end of the season. We've got plenty of experienced players

"Obviously, the first aim was to secure top six and we've managed to do that three games before the split, which is a great achievement," said MacKay.

"Now we're there, the aim is to push on.

"We've beaten Hearts, we went four points clear and we've got a game in hand coming up on Wednesday, which is a very tough one up at Inverness.

"But it's another chance for us to get points which other teams don't have so if we win that game, who knows where we can go."

An impressive away record has been the catalyst for St Johnstone's push for a Europa League place and MacKay is confident the team can end the season on a high.

"It's a great record to have," he said. "That's certainly given us a platform to build on.

"The only two games we've lost have been to Hibs and Motherwell, we lost both of them 3-2, which [were games that] could've gone either way.

"It's been a fantastic season for us so far, hopefully we can keep that going in the last eight games. Nobody could've imagined how we would've done at the begining of the season.

"Hopefully we can secure a European place come the end of the season. I don't see any reason why we can't because we've got plenty of experienced players in the squad to go with the younger ones."