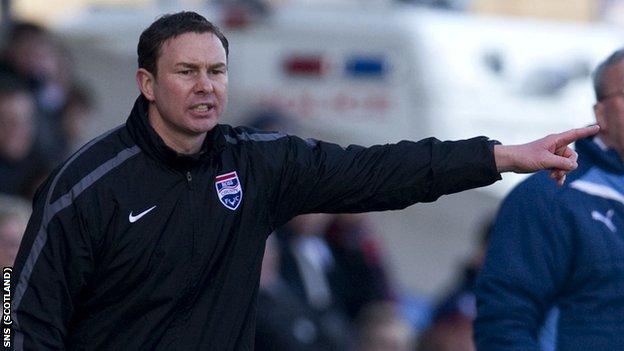 County are closing in on the Scottish First Division title and promotion to the top flight.

"I don't know where everybody's coming from," said Adams. "We're one of the most attack-minded and one of the best passing teams in the division.

"We're delighted with the progress we're making. We've done ever so well so far but that's all we've done."

Adams insists his side have shown versatility in their league campaign and is pleased with how they have played.

"That's one of the things that you find in football from time to time; they [critics] try and take the focus off their own team and move it onto another team," he told BBC Scotland.

"All we've done is string four or five passes together in the middle of the park, hit a long diagonal out to the wide left, cross into the box and get a goal. I think a lot of teams would be proud of that.

"If we've played a long ball to feet that is into a good area and we've got a cross and a finish off it then I think we're all delighted to see a player of that ability being able to do that.

"This season, we've put that all into one and been very successful at it."

Dundee face Ayr United on Wednesday and, should the Taysiders lose or draw, Adams' men can clinch the championship at home against Raith Rovers on Saturday.

However, Adams insists he is not yet contemplating Scottish Premier League football next season.

"The only thing that I'm looking at just now is the Raith Rovers game," he added.