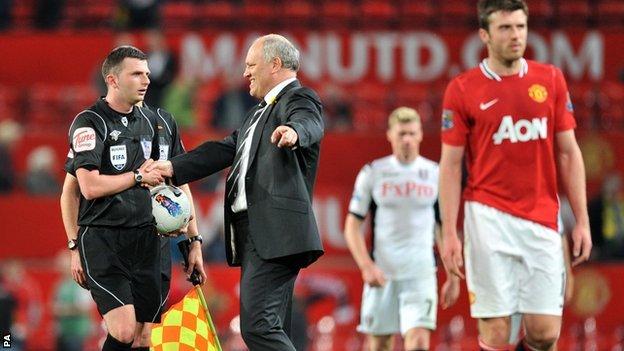 Fulham manager Martin Jol says everyone inside Old Trafford expected his side to be awarded an 87th-minute penalty in the 1-0 defeat by Manchester United.

The Cottagers appealed for a spot-kick after United's Michael Carrick appeared to trip Danny Murphy in the area.

"Everyone in the stadium expected a penalty, you have to be brave to give an away penalty at United," said Jol.

The Scot added: "They had more left than we did in the last 15 minutes.

"We had a claim [for a penalty] in the first half. Maybe the referee [Michael Oliver] was thinking about that, but we deserved that bit of luck as we dominated the game.

"For an hour we played very well and we made some decent opportunities but you have to give credit to Fulham."

Ferguson also sounded a word of warning for his side, saying their three-point advantage was not enough to guarantee them a 20th league title.

"Our form is good, it is a good position to be in but not a decisive position," he said.

"They are all challenges from here on in. Teams will be battling and won't want to be lambs to the slaughter. When teams sit back like Fulham did tonight they are hard to break down and we nearly paid the penalty."

Wayne Rooney's goal was enough to return United to the top of the Premier League table but they were given a scare in the final 15 minutes as, inspired by second-half substitute Murphy, Fulham pressed for an equaliser.

On referee Oliver's decision not to award a spot-kick, Jol added: "It was a difficult decision. If he had given the penalty he would have had to send Michael Carrick off.

"A few years ago, the ball was a metre over the line and they did not give it. Maybe the linesman was not quick enough that time.

"But the referee was there in line. It needed a brave decision because it was either a dive and he should book someone or he has to give Carrick a red card.

"I don't want to see Carrick sent off but it needed a brave decision and I think it was a penalty kick."