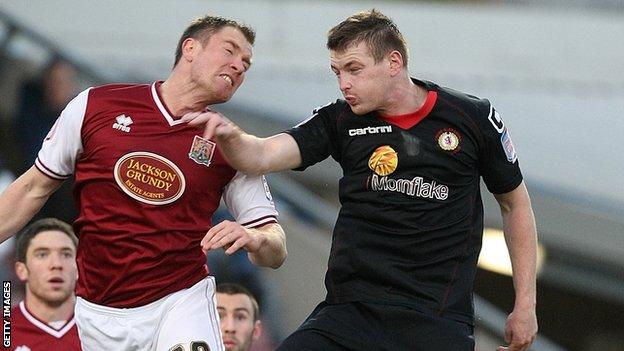 But team-mate AJ Leitch-Smith remains undecided over boss Steve Davis's offer of a one-year deal, with the option of a further 12 months at Gresty Road.

"Duggy has developed into a good centre-half but he can learn even more here," Davis told BBC Radio Stoke.

"But I want both players to be part of an exciting time around the club. I'm not setting a time limit, but I need to know soon so I can plan ahead."

Crewe have moved to within one place of the League Two play-off zone on the back of a nine-game unbeaten run.

They have not lost since a 2-1 defeat at then leaders Southend in mid-February and have won their last four games to move within four points of seventh-placed Cheltenham, who still have to visit Gresty Road on 21 April.

Liverpool-born Dugdale, 24, began his career at Crewe, spending loan spells at Accrington and Southport, before drifting permanently into non-league football at Droylsden, Barrow and Hyde United.

But he returned to the Alexandra Stadium in July 2010 over a two-year deal and has been a regular this season.

He follows the lead of fellow defender Harry Davis in signing a new deal, while the same is expected of home-grown striker Leitch-Smith, 22, who has scored six times for the Alex this season.

Since Davis took charge of Crewe in November, succeeding Dario Gradi, they have lost only four times in 22 league fixtures to move into serious promotion contention.